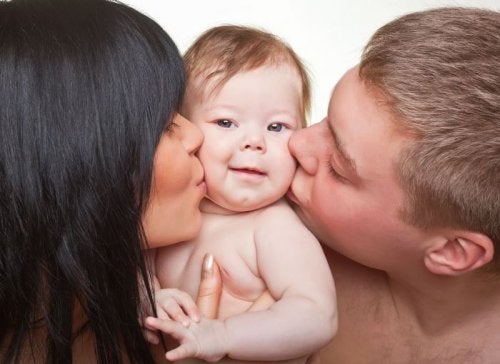 During the early development that occurs in children from 0 to 3 years of age, there are transcendent changes on a physical and cognitive level. We humans arrive in the world without knowing anything about it.

In the first few months of life, we manage to capture the main peculiarities of our environment and the people who live in it. Little by little the skills and the knowledge to fend for ourselves are acquired.

Learning and early development in the first weeks of life

When a child is born, one of the first – if not the first – thing they learn is the ability to suck milk from their mother’s breast.

What begins as survival instinct becomes the early assimilation of a skill that will keep them alive. In this stage the movement that a baby makes with their arms and weak legs are just reflexes. They still cannot lift up their heads and they barely have the strength to move it from side to side.

At this age, they don’t follow moving objects nor reach for them. They are able to maintain eye contact with objects when they are placed directly in front of them and can grab it if you help them.

They respond to stimuli related to their wellbeing: If they are cold they cry, if they feel good they are quiet.

Their sleeping patterns are variable and even though you try to teach them a sleeping routine, it is simply impossible at this age. Babies sleep and wake up, whether it is daytime or nighttime as they wish.

Even though they can maintain eye contact with adult faces, they are still incapable of returning an affective gesture. In the first weeks of life they are mostly interested in their mothers breast milk and satisfying their biological needs.

From the second month till the sixth

From the second month on, the child becomes more conscious of all the things that happen in their environment.

When they are talked to, they stay very quiet and observe the eyes, mouth and other details of the face of the person talking to them.

Their movements stop being reflexes and begin to be part of their response to certain external stimuli. Usually their movements are towards affection, for example when mom speaks to them in a animated fashion they respond by quickly moving their arms and legs.

The relationship they develop with others is very different from that with their parents. Even though they recognize the person, whoever it is, they feel more comfortable with their family. When they are picked up by strangers they always show a certain preference to be with their mom.

Although their gripping abilities are still irregular they can hold a light object for a couple of seconds and bring it to their chest or mouth in order to “study it.” They play with objects they find in their surroundings, picking them up and dropping them. This is possible because of the ocular manual coordination that they develop at this age.

In all of this assimilation, they discover their hands and learn to recognize the rest of their body in order to coordinate their movements. They strive to touch objects they like and get excited when they are close to getting to it.

Their hips and thorax are strengthened and they can now turn over by themselves in order to change positions.

By imitating the people that surround them, they learn how to project different facial expressions and emit sounds in sequence as though they were having a conversation. They smile, even at strangers. They do all of this to get the attention of others.

Children between 7 months and the first year of life

Between 7 months and the first year of life magical changes occur. The baby manages to sit and crawl on their own.

There diet is usually changed from only liquids to including solids. They learn to babble a few sounds until being able to say some words. They also become more attentive to the movement and the behavior of others.

Playing becomes the protagonist of their lives, forgetting and leaving everything including eating in order to play. They play by making repetitive movements, also by moving their toys from one place to another.

They begin to like objects that not only move but also emit sounds when they are played with. Their grip has “specialized” so much that within their fine psychomotor skills they begin to learn how to grasp objects in the form of tweezers. They also clap, say bye and blow kisses by bringing their hand to their mouth.

If they have building blocks they are able to stack them one over another.

Babies hate being ignored and they will do anything in order to maintain the attention of the family. They reject what they don’t like by shaking their head no or by pushing it away.

They begin to try to stand up while holding on to furniture. There are cases in which the baby learns to take their first steps and begin to walk before the first year of life.

Characteristics of early development from the first till the third year

After completing the first year of life, if they haven’t up till this moment, they learn to walk alone and to run.

They are able to know what they like and what they don’t. They are also able to figure out how they feel in certain situations.

They become more independent. They also learn to eat, dress and bathe alone (always under the supervision of a parent).

The games they begin to play are reproductions of life. He or she becomes the parent of their dolls or action figures giving them food. They take the toys to the doctor when they are sick and when the toys behave badly they even get a lecture!

During this stage, the child becomes aware of their routine (they have to take a bath in the afternoon, they have to sleep at a certain hour). They also begin to show the good or bad manners they learn at home.