Hearing Development in Babies: What You Should Know

Newborns immediately recognize their mother's voice, as hearing development starts in babies from the time they're in the womb. As the months go by, the auditory nerves mature and, therefore, babies' reactions to the sounds they hear in their environment increases. 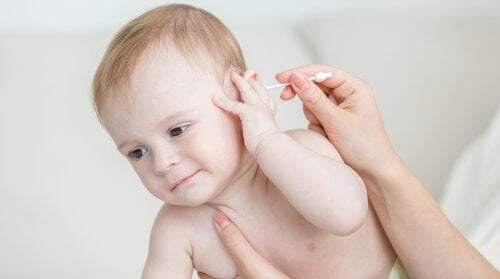 Hearing allows babies to experience sensations with the world around them. The sounds of their parents’ voices and those of nature connect them with their surroundings. As a result, there are a number of things that encourage their hearing development.

Long before birth, babies can detect and respond to sounds from inside the womb. Babies can hear the heartbeat of their mother and her voice. They can also perceive musical melodies.

Babies are born with their ears perfectly developed (formed in the womb after the first trimester) and ready to start listening to everything around them. However, their brain can’t yet interpret the meaning of words or sounds.

As babies grow, their interactions with the environment materialize more. They often divert their attention to any striking sound. Also, when they still can’t speak, they observe and listen to their elders with interest.

These are clear signs that a baby’s hearing is developing as it should. They gather a lot of information about their surroundings, so hearing is a fundamental factor in language development and brain stimulation. With that being said, if your baby suffers from a hearing problem, identify and treat it immediately.

The hearing development process in babies

As a parent, you should be attentive to the stages of your baby’s growth. In regards to hearing, record observations on their hearing development during each stage of their growth, using the following points as guidelines.

“Babies are born with their ears perfectly developed. However, their brain can’t yet interpret the meaning of words or sounds.”

Even if we can’t exactly define how our children’s hearing develops, since each child is unique, we should be aware of the process. Their language development depends on it.

If time passes and your baby doesn’t learn new words or babble, you should resort to medical tests, such as audiometry, to identify potential hearing problems. If diagnosed in time, those problems can be corrected and hearing aids can be implemented if necessary.

To avoid hearing ailments, babies should be protected from loud and prolonged sounds. Also, if your baby scratches his or her ears frequently, that could be the sign of a serious ear infection. Never put cotton swabs or other objects inside your baby’s ear canal, as that greatly increases the risk of eardrum injury.

Likewise, you can help develop your baby’s auditory sense with exposure to new sounds via listening to music, reading a book, or talking. These activities not only stimulate babies’ hearing, but they also learn new words that will be very useful when they start talking.

On the other hand, describing objects and daily actions, enunciating colors and the baby’s name, and explaining the origin of noises helps babies understand the environment that surrounds them.

In conclusion, the correct development of babies’ hearing plays an important role in their day-to-day lives and guarantees less difficulties in the future. Even though some hearing problems are impossible to prevent, you should be attentive and attempt to correct as many problems as possible when diagnosed.

Ways of Stimulating Your Baby’s Hearing
A baby's hearing needs to be nurtured and stimulated, and in this article you can discover the best ways of doing this. Read on and find out! Read more »
Link copied!
Interesting Articles
Breastfeeding and baby formula
Do Women Lose Weight While Breastfeeding?