What Is The Babinski Reflex? 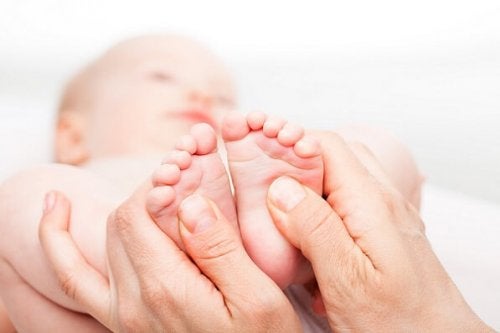 Have you ever heard about the Babinski reflex? This reflex has to do with the automatic responses that newborns produce when feeling a certain type of stimulation.

The Babinski reflex is also known as the extensor plantar reflex; it consists of the movement of the big toe upwards as well as the fanning out of the other toes when the baby’s sole is stimulated.

The Babinski reflex occurs naturally in children up to the age of 2. However, sometimes it can disappear at the age of one. It usually disappears as the baby begins to crawl and walk.

Parents should be aware if the reflex disappears before their child turns 2. If this occurs, contact your pediatrician.

The Babinski reflex in children older than 2

If the reflex doesn’t disappear after the age of 2, it could be interpreted as a possible central nervous system disorder. If you notice that your child has the Babinski reflex after the age of 2, consult your pediatrician so they can evaluate the situation.

Doctors can provoke the Babinski reflex during physical examinations. Mothers can also do this at home – simply rub the lateral part of the baby’s foot with a flat instrument. The instrument shouldn’t cause any kind of pain or discomfort to the child’s skin.

Gentle pressure on certain parts of the leg can also produce this reflex, however the most effective method is stimulating the sole of the foot.

The instrument used to perform the test must move from the heel upwards until arriving at the base of the toes. These reflexes are very easily observable in newborns.

In newborns however, there is a slight variation – their toes produce a grip reflex rather than the Babinski reflex.

What reactions can stimulation cause?

The baby responds to the stimulation with their toes. In healthy adults, when their foot is stimulated the bone that forms the heel moves away from the imaginary central line that passes through the body.

Another response that babies can have is extension. Dorsiflexion of the big toe occurs and the other toes fan out. This is called a “positive Babinski reflex” and it is completely normal in newborn babies.

In some cases, ambiguous responses may occur when the baby is stimulated. The baby’s toes may flex and then extend. In other cases, it only happens unilaterally.

In order to make sure that there are no lesions in the corticospinal tract, it’s important to perform other variants of the Babinski reflex when this occurs.

Conditions associated with the Babinski reflex

It’s important to emphasize that the Babinski reflex should be present in children under the age of 2. It should then disappear as the child grows and be replaced by the flexor reflex.

If the Babinski reflex doesn’t occur in the first 6 months after birth, it’s considered to be negative. This could indicate certain abnormalities such as cerebral palsy, mental retardation or less frequently, motor delay.

In older children it could indicate metabolic or structural abnormalities in the corticospinal system. This could cause various symptoms such as lack of coordination, difficulty controlling muscular movements, weakness and fatigue.

Sometimes the reflex is present on one side of the body and not the other. This could indicate which side of the brain is affected.

It’s important for parents to be aware of the Babinski reflex. Try to analyze if your baby reacts appropriately to stimulus and contact your doctor if they continue to present the reflex after the age of 2. Ask your doctor about any additional questions you may have.