Improvisational Theater for Kids: What to Know

Improvisational theater is a fun activity for kids that helps them develop a wide range of skills and abilities. In addition, it helps them achieve goals in an entertaining way. 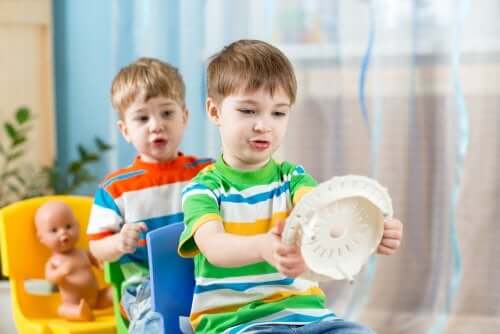 Improvisational theater for kids can serve as a powerful educational and developmental tool. Beyond teaching them about theater and acting, the improvisational techniques they learn can act as a valuable resource when applied to daily life.

Acting and improvising in the classroom and elsewhere stimulates kids’ creativity. It promotes thinking skills and using the body as a means of expression.

Improvisation is at the heart of all artistic creation. Using this technique, children can explore a world of possibilities while learning about their surroundings, their classmates, and themselves.

Ultimately, improvisational theater involves playing a game with specific rules. Through this game, kids get to immerse themselves in emotions, feelings, and reality. To improvise is to focus on the “here and now” and as such can be understood as an exercise in mindfulness.

The main objective of improvisational exercises for children is learning to improvise, but there are others as well. In this article, we’ll take a look at other important goals for each exercise.

It’s essential to remind children that, while they’re improvising, the important thing is to “let go.” This allows them to understand that, sometimes, you have to be able to not overthink things and simply let them happen.

Put on a lively song and form a circle with the kids. First, encourage them to follow our movements. Start by making simple and repetitive movements to the rhythm of the music and have the kids imitate you.

Next, the children take turns performing a movement (also to the rhythm of the music) and the others have to imitate it. Guide the exercise by pointing out the child who is taking the lead.

If they find themselves blocked, remind them that the important thing is to improvise, not to think too much, and get carried away by the music.

Instruct the children to walk through the whole stage space with some basic rules. They should try to occupy the entirety of the space. They should remain equidistant from one another, meaning that there shouldn’t be large gaps between them, nor should they be grouped too closely together.

As they walk through the space, narrate what they should be doing. Here are some of the guidelines:

Divide the children into groups. If there are more children to be included in the activity, you can form more than two groups.

This activity consists of working in groups to create a static scene, something like a 3-D photo. While one group creates its picture, the other kids should remain silent with their backs turned. Once the image has been completed, the other children turn around and silently observe it.

In order to create the static scene, the group needs to decide who will play which character, the story they want to portray, and which action each of them will be performing in the image.

After observing the image for a little while, the other children should raise their hands and offer guesses as to what they’re seeing. They can guess who the characters are, what they’re doing, and what’s going on in the overall scene.

Lastly, give the children forming the image a cue to bring the scene to life by starting to move. They can then explain what was happening in the scene and compare it to what the actors were going for, and what it looked like to the others.

Finally, it’s important to remember that in improvisational theater for kids, it’s essential to emphasize mindfulness and the importance about thinking about one’s classmates.

The students should also be taught to be as generous with themselves as they are with others. There is no place for judgment. Ultimately, the goal is to let them be carried away by these new sensations.

Benefits of Taking Children to the Theater
One of the most fun and educational activities you can do is take your children to the theater. It's a way to express yourself and boost teamwork. Read more »
Link copied!
Interesting Articles
Eating habits for children
Mindful Eating for Kids: Why and How to Do it