How to Treat Issues Related to Adenoids in Children

Adenoids are a patch of tissue located in the upper area of the throat, around the tonsils. During the first years of a child's life, there is a greater risk of contracting infection. 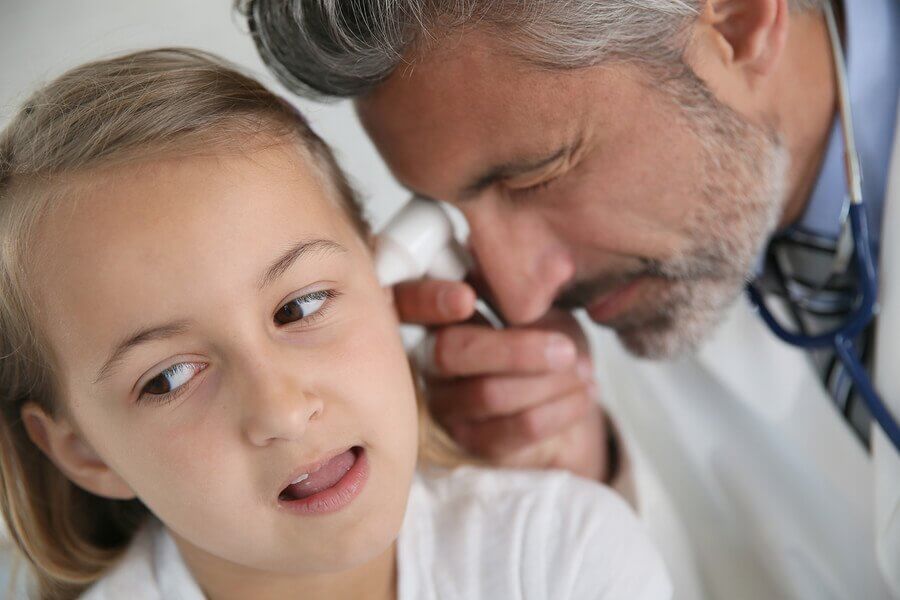 Adenoids are a patch of tissue located in the upper area of the throat, behind the nose. Together with the tonsils, they form the superior axis of the lymphatic system. Adenoids serve to eliminate infections, and have other purposes as well.

This tissue starts to grow from the time babies are still inside their mother’s womb. During the first 6 years of life, this tissue is responsible for trapping all sorts of germs and bacteria that enter through the nose and mouth.

Once this stage is over, human beings have other methods of defense. Therefore, under normal conditions, adenoids start to become progressively smaller. By adolescence, they’ll have shrunk considerably.

The origin of adenoids

Adenoids generate lymphocytes, a type of white blood cell present in the blood that help to fight infection. When adenoids become active, it’s common for children’s ears to become swollen – a situation known as enlarged adenoids. Swelling usually goes down once the infection is gone.

Signs that there is a problem with your child’s adenoids

In general, adenoids are very active in children between the ages of 3 and 6 years of age, fighting off infections. During this time period, the immune system is finalizing its development.

An excess amount of work can cause the adenoids to become permanently swollen, even when no infection is present.

This is the scenario that tends to present the greatest amount of difficulties. It sets off a vicious cycle that, on occasion, doesn’t go away with simple medication.

Swollen adenoids don’t allow for the proper circulation of air, which leads to further infections. Cases of infection that don’t go away with antibiotics end up causing more swelling. This, in turn, makes air flow even more difficult.

Repeated episodes of ear infections are commonplace in children with continuously enlarged adenoids. It’s important for parents to practice extreme precaution, because this is a relatively common situation.

Otitis media is the most common illness. Here, inflammation occurs in the middle ear in the part just in front of the eardrum. If the illness evolves without proper control, it can lead to secretion. Secretions can consist of a waxy, watery liquid, mucous or pus.

“During the first 6 years of life, adenoids are responsible for trapping all sorts of germs and bacteria that enter through the nose and mouth”

When the swollen adenoids in children’s ears end in otitis media, doctors will prescribe antibiotics. This treatment will last between 10 and 12 days. If the appearance of these infections is frequent, specialists will move on to the next level of treatment.

The same treatment plan is followed when enlarged adenoids produce frequent breathing problems, cases of sinusitis, rhinitis, or constant episodes of high fever. In all of these cases, intervention consists of scraping or removing the adenoids.

The best time for children to undergo the removal of adenoids is at 2 years of age. When serious ear infections are very frequent, specialist will go ahead and intervene no matter what a person’s age.

As for babies who aren’t yet one year old, treatment is different. Rather than operating, an ear nose and throat doctor will squash the adenoids with his or her finger. Then, and depending on the evolution of these patients, the doctor will evaluate the need for surgical intervention.

This is the name of the operation in which surgeons remove adenoid glands. In general, doctors will remove a child’s tonsils at the same time – a procedure called a tonsillectomy. Before the operation, children are given general anesthesia.

Adenoidectomies are considered an outpatient surgery and are almost always performed on children. In most cases, children go home the same day. Complete recovery should last a maximum of 2 weeks.

Irrational Childhood Fears: What You Need to Know
Irrational childhood fears are a common thing. Read this article to learn a few formulas to help little ones overcome this problem. Read more »
Link copied!
Interesting Articles
Illnesses in children
Marfan Syndrome in Children: What You Should Know