What Is the Anti-Vaccine Movement All About?

The anti-vaccine movement is leading to preventable deaths all around the world. Learn more about this movement and the importance of vaccines in today's article. 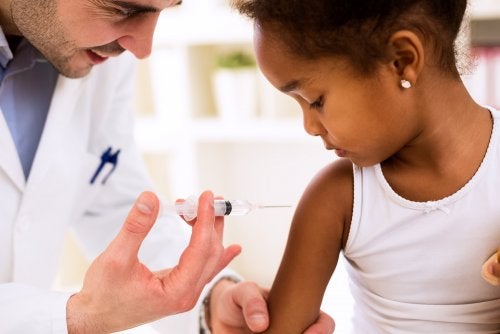 The anti-vaccine movement is nothing new – it has existed since the first vaccines appeared. The movement is very dangerous because it puts public and individual health at risk.

What’s more, there is no scientific evidence against vaccines. Children and individuals with a repressed immune system are the populations that are most in danger.

How did the anti-vaccine movement come to be?

Anti-vaccine movements can be defined as a collective of people who are against vaccination. They believe that the health risks involved with vaccines or the act of vaccination outweigh the benefits. The reasons for their beliefs against vaccines may be religious, political, philosophical or sanitary.

The origins of the first vaccine go back to the year 1796. In that year, Edward Jenner, a rural English doctor, described the ability to prevent the spread of smallpox. How? By putting healthy individuals in contact with the puss from the wounds of an individual ill with smallpox.

At that same moment, the first vaccine skeptics appeared, even among the medical community. From that time and until today, many countries have suffered outbreaks of preventable illness as the result of the influence of anti-vaxers.

On of the most well-known articles sited by the anti-vaccine movements is one published in 1998 in the The Lancet. The scientific journal’s article associated the measles-mumps-rubella vaccine with autism and other bowel diseases.

Six years later, it was revealed that the main article’s author, Andrew Wakefield, had financial conflicts of interest. These drove him to modify the results of the study for his own benefit.

Several co-authors of the same article ended up retracting the conclusions supposedly obtained by the study. Unfortunately, the damage had already been – and continues to be – done. The fraudulent article created a state of panic and produced a decrease in the rates of immunization. In turn, failure to vaccinate has led to outbreaks of the same diseases.

What does the anti-vaccine movement base itself on?

Different studies have analyzed the content of anti-vaccine websites. Some of the arguments that these groups claim can be divided into the following categories:

As state above, there are a variety of reasons that different groups argue against vaccination. The arguments that they claim can be divided into the following categories:

What are the benefits that vaccines offer?

Vaccines represent one of the biggest advancements in the history of medicine. Science has proven that vaccines prevent millions of deaths every year.

In the same way, millions of people around the world die every day as a result of vaccine-preventable illnesses. This may be because of lack of access to the vaccines, or as a direct result of the anti-vaccine movement.

Here are some of the most important characteristics of vaccines:

Other benefits of vaccines

Currently, there are no alternatives to vaccines that have proven to be better (or even close) to the vaccines themselves. In every state in the US, children must have their immunizations in order to attend school. That being said, however, 47 states allow for exceptions on the basis of religious or philosophical objections.

Just the same, parents have a civic and moral obligation to protect their children. Doing so allows for the construction of a better society in which we protect ourselves and, especially, those who don’t have the opportunity to be vaccinated.

Today, we’re widely unaware of the gravity of many childhood illnesses because we ourselves haven’t witnessed their horror. While improvements in hygiene have no doubt contributed to the decrease in their occurrence, we cannot deny the role of vaccines in their eradication.