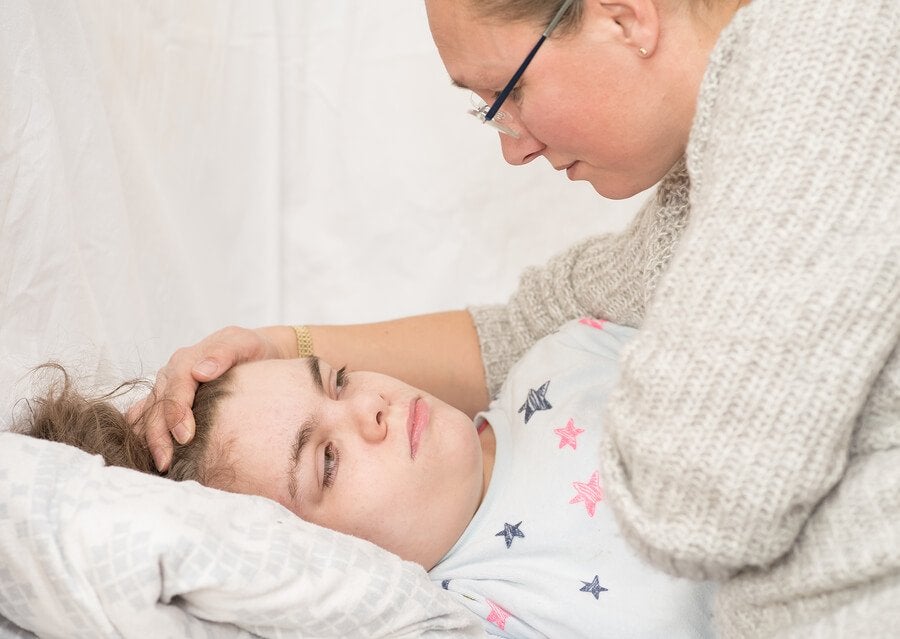 Most children with epilepsy are able to lead a normal life. While most of them need medication, there are cases of people who don’t need it.

It’s even possible for the epilepsy to disappear before the child reaches adulthood. This, however, depends on several different factors.

Knowing the possible causes, symptoms and treatment related to this disease will allow you to keep it under control in your child’s life.

By doing this, you’ll be able to avoid potentially difficult moments and unnecessary worries. Most important of all, you’ll noticeably improve your child’s quality of life.

Children with epilepsy: what are the causes?

The cause of epileptic seizures is a lack of control of electrical discharges, caused by an imbalance in neurotransmitters. This happens when there is an excess of these chemicals in charge of sending signals between the neurons.

Another cause could be a decrease in the number of these neurotransmitters. However, in most cases of children with epilepsy, it is an idiopathic condition, meaning it occurs due to unknown causes.

In a lower percentage of cases, there are cryptogenic or symptomatic epileptic crises, which are due to a specific cause. They can appear because of diseases such as meningitis, brain tumors, problems during or after birth, trauma, abnormalities or strokes.

In some cases, there is a history of epilepsy in the family. In addition, the genes or chromosomes may have abnormalities.

Symptoms of epilepsy in children

A child is said to be suffering from epilepsy when he has had more than one seizure. Many infants have different symptoms before an attack. These could be headaches, behavioral changes or digestive problems. It’s possible for these signs to go unnoticed, or even for there to be no signs at all.

We should point out that an attack differs from a seizure, as the former lasts only a few seconds or a few minutes. Some types of epileptic attacks are “tonic” and cause total body stiffness.

Seizures cause muscular shocks throughout the body. These are uncontrollable and repetitive, with total loss of consciousness.

Other seizures are partial and occur without losing consciousness; they affect only one part of the body. After a crisis, the child may have a period of drowsiness and may not react to external stimuli for around an hour.

How to know if my child has epilepsy?

The first thing is that your child must have suffered at least one seizure or attack for the specialist to be able to perform a physical evaluation. This includes an exploration of the child’s body and an inquiry about the duration of the attack.

He’ll also ask about the types of movements that happened during the attack, and whether there was a loss of consciousness or if a specific part of the body was affected.

The evaluation always finishes with an electroencephalogram. This test measures the electrical activity of the brain which will determine the type of seizure or attack that the child suffered, and the possible causes.

Blood tests are also important, because they can help diagnose possible conditions that could be causing the epilepsy. If the neurologist sees fit, he will also suggest a computerized axial tomography study to check for any acute neurological injury or other disease.

Ultimately, an MRI scan of the brain can reveal new seizures and where they are occurring in the brain.

“Epilepsy can occur due to diseases such as meningitis, brain tumors, problems during or after birth, trauma, malformations or strokes”

Generally speaking, children with epilepsy need medication. However, you should keep in mind that this is a complex disease that affects each child differently.

Consequently, not all children respond in the same way to the same medication, so there is no single treatment for all cases.

Fortunately, there is a wide variety of anticonvulsants or antiepileptic drugs that can help to reduce the frequency of attacks or seizures.

For children who don’t respond to the medication, there are other options. There are medical devices that can treat the seizures, and dietary therapies such as the ketogenic diet. This diet is free of carbohydrates and aims to reduce the child’s glycemic index.

In cases of severe epilepsy, there is the option of brain surgery, and this has been carried out with satisfactory results.

Can epilepsy be cured?

Epilepsy can often be cured or controlled with medication. However, this depends on several factors, such as the type of epilepsy, the reaction to anticonvulsant treatment and the age at which the attacks begin. Another factor is whether there has been any damage to the nervous system that may be causing the disease.

Symptomatic epilepsies are difficult to cure, even to control, because they’re conditioned by a type of brain anomaly. In addition, in these cases the attacks can progressively damage the nervous system.