My Child Makes Excuses to Avoid Going to School

Consistent refusals and excuses can mask a child's more worrisome and serious reasons for rejecting an activity or obligation. 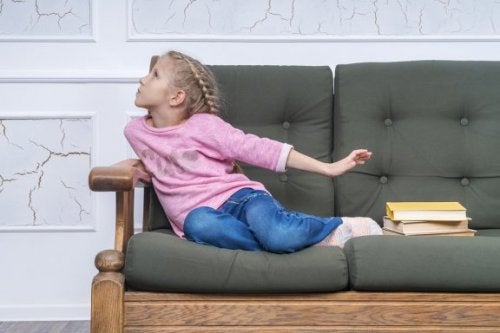 Find out if your child is making excuses to avoid going to school, and discover the reasons why he or she may be doing this.

The most frequent excuses to avoid going to school

Just before going to school, children might complain of stomach pain, a headache or a sore throat. This apparent illness will improve if you allow the child to stay home, but it reappears the next morning.

Also, children may show their displeasure by crying or throwing a tantrum. In older children, there may be challenging or aggressive behavior toward parents, refusal to get up or prepare to go to school, running away from home or school, or episodes of a bad mood.

Why some children make excuses

The excuses to avoid going to school can have internal or external origins. Next, we’ll review the causes of each of these types.

First of all, your child may feel anxiety or paralyzing fear to leave the safety of his or her parents and the home. For example, your child may think that something bad will happen to him if he isn’t at home with you.

He might think that he’ll get lost and won’t know how to find you. He may even believe that his parents will die while he’s away.

Likewise, it can also be due to family situations. In cases of divorce, abuse or domestic violence, children may develop a fear of leaving the home. They try to avoid having their parents fight and look for excuses to receive their attention.

In other cases, some children avoid going to school because they have an undiagnosed learning disorder.

In addition, older children may consider that staying home is a more pleasant experience than going to school. They want to sleep in, get online, watch television, play video games or do their other favorite activities.

Other reasons include social factors. In these cases, children fear facing situations like getting on the bus, writing on the board or speaking in front of their teachers and classmates. Because they feel afraid of failure, they create excuses to avoid it.

Another cause includes interpersonal problems. In younger children, they might consider themselves ugly or bad or think that no one wants to play with them.

In addition, it’s feasible that they may suffer from threats or some humiliating treatment. This reason is the most common among adolescents. Both teachers and parents must collaborate in order to stop bullying as soon as possible.

Also, physical changes occur. Young people feel concerned about their physical appearance, such as being overweight or very thin. This leads them to have low self-esteem.

In the case of girls, early or noticeable development causes anguish. Hormonal changes add to these insecurities. In addition, in this new stage they’re no longer the older and more experienced children; they become the youngest and most inexperienced teenagers.

“In older children, they may consider staying at home to be a more pleasant experience than going to school.”

When excuses are common

Making excuses to avoid going to school are very common and can occur at any time. However, they occur more frequently in children between 5 and 7 years of age and between 10 and 13 years of age.

In fact, it’s estimated that up to 25% of school-age children will make excuses to avoid going to school at some point.

In young children, this situation may appear after the holidays or after a brief illness. This is because a considerable time of family bonding time has occurred. It’s also possible for excuses to be made after the death of a relative, a change of school, moving to a new home, etc.

Before considering what your children say as a simple excuse, think about this:

Problems that may cause frequent excuses

When a child persists in making excuses to avoid going to school, it becomes a worrisome situation. In these cases, it’s advisable that you seek the support of a mental health professional. Remember that this will be very important for your child’s overall growth.

Leaving school because of fear and anxiety can cause serious academic and social problems. In the long term, it could also lead to the complete abandonment of studies, criminal behavior and economic deprivation due to the difficulty of keeping a job.

Social isolation and marital problems are also possible consequences. As adults, this situation can cause anxiety, depression, panic and personality disorders.

Although making excuses to avoid going to school is very common in school-age children, you must try to find its origin. By successfully dealing with the situation, your children will be able to fully enjoy their school experience and feel much calmer.

Link copied!
Interesting Articles
Parenting
When Children Have to Pay for Their Parents' Frustrations