Why Do I Have Itchy Skin during Pregnancy? 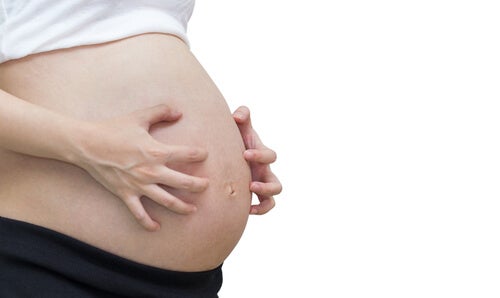 If you’re pregnant, be prepared to experience several changes in your body, including weight gain, cramps, changes in skin tone and, above all, itchy skin. Still, you may wonder if these changes are normal.

Each condition is specific to various stages of pregnancy, but if you follow your obstetrician’s recommendations, these changes in skin during pregnancy don’t have to become a major difficulty.

These are the skin conditions that appear during pregnancy and have certain characteristics.

All of them are completely normal and, unless you notice something very unusual or that causes great risk to yourself, you won’t need to go to a health professional.

Next, we’ll describe the most frequent conditions that can cause itchy skin during pregnancy.

Its incidence is quite variable, as it’s mostly seen in women who have had several children, and a considerable percentage (70 percent) occurs in white women.

It begins with an exasperating itch that eventually turns into a blister. It usually forms on the abdomen near the navel.

This condition is autoimmune related and should be treated with corticosteroids or antihistamines. Even after delivery, the blisters may remain for a few weeks, so the treatment must be continued.

This is perhaps the most frequent skin complaint during pregnancy, and its incidence is much higher in first-time mothers and in twin pregnancies. Being overweight increases the likelihood of this rash.

It’s defined as a very intense and almost unbearable itching that causes large lesions on the skin. These lesions are palpable to the touch and reddish in color. They appear on the hips, abdomen, arms and legs, and the cause is distension of the skin during pregnancy.

The ultimate cause of this is parakeratosis, the formation of cells in the skin that alters the natural keratin and causes overheating and itching. The treatment is based on powerful topical corticosteroids applied to the lesions several times a day.

This is a rash of pimples accompanied by very itchy skin. In addition, it can occur across the body of a pregnant women. It’s noticeable during the second trimester and tends to disappear after birth. The cause is attributed to acne and hormonal reactions.

Corticosteriods should be applied to the skin during pregnancy. Benzoyl peroxide and ultraviolet B therapies are also recommended.

The incidence of prurigo is higher during the first trimester of pregnancy. It produces palpable and elevated lesions that form into nodules. It’s common for them to appear on the arms and legs and to create intense itching.

There are no direct effects on the fetus when using corticosteriods, so they’re most effective for treatment. Antihistamines can also be used if the itching exceeds the pregnant woman’s ability to resist.

The severe itching of the skin is characteristic, and the intensity is such that you can cause injury to yourself from scratching. In other words, the skin lesions aren’t from the itchiness, but from the action of the nails to relieve itching. In addition, this itch can spread to the hands.

In some cases, the skin becomes somewhat yellow. This is known as jaundice. The cause is derived from the liver, which secretes a substance called bromine sulfataleine. The increase of estrogen during pregnancy is also implicated.

After a blood test, you’ll see an increase in alkaline phosphatase, transaminases and bilirubin. Therefore, treatment will be based on resincholestiramine and an antipruritic, in addition to ursodeoxycholic acid.

In most cases, the prognosis for the mother is good. The skin may become marked during pregnancy, but because of the scratching rather than the condition itself.

Precautions for itchy skin during pregnancy

It’s important for you to take the best care of yourself during pregnancy, thus avoiding things that could cause you major discomfort.

For example, you should:

In the end, it should be considered normal for your skin to change during pregnancy. Your belly beings to grow, and that causes skin tissue to relax, which is why stretch marks often appear.

Heat and sweating can also irritate those folds, causing more itching. Remember that most will disappear after delivery, and you can use substances or creams to regenerate your skin.