What Is Pica During Pregnancy?

Pica disorder refers to the irresistible urge to ingest non-nutritive substances. During pregnancy, pica can cause health problems for mothers as well as their babies. 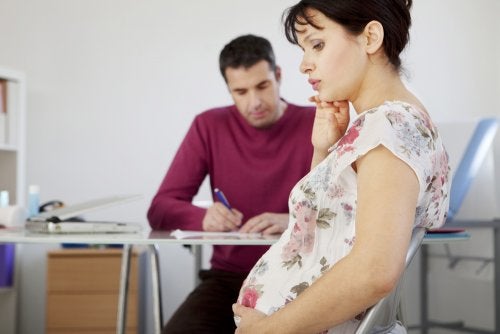 Today we want to take the opportunity to talk about pica during pregnancy. This eating disorder is common yet quite unknown.

When we think about eating disorders, the first to come to mind are usually anorexia or bulimia. However, there are other less well-known eating disorders that also affect the lives of those who have them.

Pica is an eating disorder that involves an irresistible desire to ingest or lick substances that are non-nutritive. The most common substance are sand, plaster, soap, ice and toothpaste.

The diagnostic criteria for pica disorder is specific. The DSM-V states that the ingestion of non-nutritive substance must persist for at least a month. Furthermore, it must be inappropriate for a person’s age. Also, it cannot be part of a socially or culturally sanctioned practice.

This disorder most commonly appears during infancy, between the ages of 1 and 6. It’s especially frequent in individuals with autism, developmental delays, and malnutrition. It’s also quite common in women who are pregnant or experiencing stress or anxiety.

While it’s quite common for women to experience cravings during pregnancy, they usually involve common foods. Pica during pregnancy usually appears during the first or second trimesters. It may be related to stress, anxiety, or fears that are typical during these weeks of pregnancy.

Pica disorder is more common among pregnant women under the age of 20 who already suffered pica during childhood. Normally, the disorder disappears after giving birth. However, there are some cases of women who continue to experience pica after their babies are born.

The causes of pica during pregnancy

While there are no clearly identified causes of the origin of pica, there are some hypotheses that shed light on the subject. Sometimes, these unusual cravings may be related to underlying physical or mental conditions.

On the one hand, pica may develop as a result of an internal state of anxiety or fear. On the other hand, there are studies that connect pica during pregnancy to deficiencies in iron or other vitamins and minerals.

According to these studies, women who are anemic tend to crave eating ice. Bringing up their iron levels can help reduce this desire. In the case of calcium or zinc insufficiencies, pregnant women’s bodies may seek to compensate these substances.

The consequences of pica during pregnancy

The ingestion of non-nutritive substances is harmful both for you and for your baby. While eating ice is relatively harmless (though it can cause damage to your teeth), other substances can lead to serious consequences.

Of patients that suffer pica, 75% end up requiring some sort of surgical intervention. 30% suffer complications of some sort, and 11% die as a direct or indirect result of this disorder.

The most frequent complications that result from pica disorder are intestinal obstructions. Pica can also lead to lead poisoning, infection and the appearance of parasites. What’s more, pica places mothers at greater risk of premature birth.

Lastly, in the majority of cases, the ingestion of these substances interferes with the proper absorption of nutrients from foods. This in turn produces nutritional deficiencies.

The prevention and treatment of pica

When it comes to pica disorder, it’s critical to act as soon as possible. Doing so will help put an end to the behavior before it becomes part of a woman’s daily habits. Once the habit is established, it’s much more difficult to eradicate.

Women who are experiencing pica should inform their doctor right away. That way, a medical professional can perform necessary exams in order to determine the scope of the ingestion.

Doctors will also monitor iron levels as well as other vitamins and minerals to determine the need for supplements.

The prescription of pharmaceuticals such as selective serotonin reuptake inhibitors may also be necessary. These can keep stress and depression under control if they’re to blame for the disorder.

Lastly, it’s vitally important to reach out to a psychologist and begin therapy. Cognitive behavioral therapy is the best type, as it will help manage impulses and the conduct of compulsive ingestion.

What Is Pregorexia? Symptoms and Consequences
Pregorexia is an eating disorder in pregnant women. It occurs when a pregnant woman wants to maintain the body weight she had before getting pregnant. Read more »
Link copied!
Interesting Articles
Preparing for childbirth
Self-Hypnosis in Childbirth: What You Should Know