How to Recognize When Moles Are Cancerous

Moles are known to have unique and particular characteristics, and that's why it's so important to be able to identify if they're benign or cancerous. 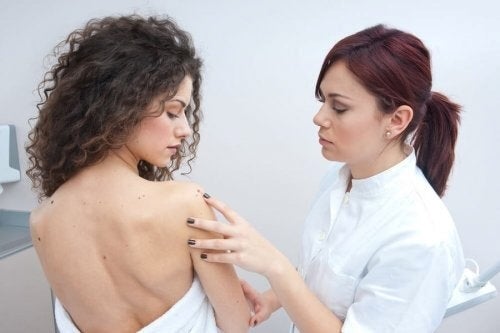 Moles are a common skin growth that appear as spots of pigmentation on the skin. They can have different tones and shapes. Their scientific name is melanocytic nevus. These skin growths are present in everyone, although those with fair skin are more likely to have more of them. As their color and shape tend to vary, many people ask how to recognize when moles are cancerous. We’ll highlight what you should look out for in this article.

Moles are concentrations of pigment-producing cells in your skin tissue. Whether they’re benign or not will depend on how you care for your skin, as well as genetic factors and overall health. If you’re Caucasian and you have very fair skin, then this article will be of special interest to you, especially if you have a lot of moles and you’ve been experiencing some discomfort or unease about their appearance.

The main concerns about mole abnormalities

There are a number of considerations you should take into account about moles before you have your skin checked by a doctor. Healthy moles are asymptomatic. This means they present no pruritus or itchiness, burning, inflammation, oozing, or redness of the skin.

Given these initial descriptions of what it means to have a healthy mole, you now have some idea of what you need to watch out for to detect any anomaly on your skin. One of the first lines of detection for any kind of skin tumor requires that you know your own skin. A mole has the potential to become something cancerous when there are changes in its shape and color.

Learn to recognize when moles are cancerous or benign

Healthy moles have a circular shape, with well-defined borders. They can also be oval in shape but their diameter shouldn’t exceed more than 5 mm. Dermatologists will commonly give you this reference so you have some idea of the size – a mole should be no larger in diameter than the eraser at the end of a pencil. If you have a mole that is larger than that, you should have it examined. Also, make sure to monitor it for changes.

There are two general mole-types when classified in terms of their shape. Flat moles tend to be the most common, more so than raised moles that are more fleshy and protrude somewhat from the skin. It’s commonly believed that if a mole is visibly raised or grows, it can be harboring a melanoma. But that isn’t necessarily true.

Although when it comes to abnormalities in a nevus, an irregular shape can raise alarm. But only the dermatologist can really evaluate a skin growth. They’ll determine in their examination if it’s something that warrants further tests.

This is an important point to make because you shouldn’t remove or alter moles in any way unless they present symptoms. Symptoms to look out for include itchiness, burning or oozing. In any case, it’s best to have any excision or biopsy performed by a specialist in a doctor’s office.

Pay attention to the color

With respect to the color, there is generally a range between ocher and brown. This can also include black, blue, and red in the case of the so-called blood mole. Any change in the color of moles can also be an indication of something you should point out to your doctor. However, as we mentioned when discussing the shape, if it’s asymptomatic in theory there is little to fear.

The color of the mole will also be closely tied to the person’s skin tone. Caucasian or fair-haired people tend to have moles that take on tones between pink and light brown. People with dark hair and skin can have moles that are dark brown to black.

How to recognize when moles are cancerous?

It’s not very common that a healthy mole becomes melanoma. There need to be some exceptional conditions for that to happen. Some people are more susceptible or have a higher propensity to develop melanoma than others. Those with very fair skin or those who expose themselves to the sun without protection are at higher risk.

Although it’s good that you periodically do a self-check to notice any changes or alterations in your moles, it’s only the dermatologist who can really determine the exact condition of the mole. They’ll know the types of procedures or care that it warrants. Likewise, if you’re a person with ten or more moles on your body, you should consider going to see a dermatologist. They can show you how to properly take regular checks of your own skin.

Finally, we want to remind you that it’s always good to think about prevention and to take proper care of your skin. You should avoid long exposure to the sun and take other measures like using adequate sunblock so your skin stays healthy. That way you won’t develop more risk of finding cancerous skin cells.

How to Treat Blisters in Children
By following a simple plan of action for how to treat blisters in children, you'll have peace of mind knowing you're taking good care of the affliction. Read more »
Link copied!
Interesting Articles
Teenage illnesses
Teenagers that Watch Pornography

Every year, students must take a number of tests – both professor-designed and standardized. And their performance on these tests…

Are you and your teenagers having a hard time getting along during lockdown? Do you wish you could share some…