Babies may suffer from sleep regression, which is why it’s very important for you to understand it to be able to overcome it. 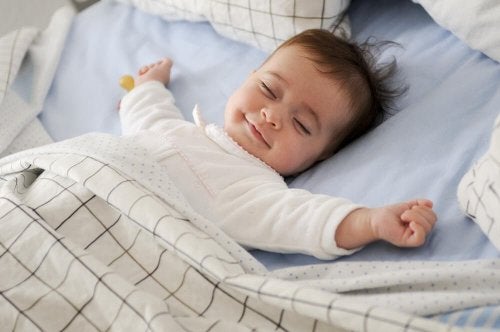 Sleep is very important for parents, as valuable as the air they breathe and the food they eat. For babies, sleeping is just as, or even more important. There may be times when your baby seems to be starting to sleep better, but suddenly, a totally puzzling sleep regression begins.

However, from now on, you’ll be able to understand it to overcome it!

If babies seem to spend most of the day sleeping, it’s because, somehow, they do. Newborns normally sleep at least 16 hours a day (both during the day and night). That amount decreases with age, but a little more than 14 hours at six months is necessary. When a baby turns one, they still need a little less than 14 hours of sleep.

Naps count as part of the total sleep. But, due to the fact that each child is different, the sleep requirements differ per child. It’s likely that at least a couple of months will pass before your newborn is settled into the desired routine of three naps per day.

If the first few weeks of parenting seem like a big sleepless blur, welcome to the club. Your newborn partially dictates when you sleep based on when they sleep. Rest assured, by three months, most babies get about two-thirds of their sleep needs at night.

Stages and causes of sleep regression

Five stages of regression occur in infants and young children:

How to deal with sleep regression

You can try some methods to restore your baby’s sleep patterns. Firstly, try more meals, either at night or during the day. Accelerated growth isn’t just for teens. Remember that your baby is hungry and needs extra calories.

Nothing makes a baby feel safer than cuddles from their mom or dad. Comfort your baby with additional kisses and hugs but avoid creating bad habits, such as rocking them so they can fall sleep or giving them a pacifier when you already took it away from them.

Lack of sleep makes everyone tired, so try to institute an earlier bedtime. This is a solid strategy if they miss naps or wake up a lot at night. Lastly, you don’t have to go through this alone. Talk to other parents and ask them for tips and tricks. And, of course, turn to your partner. You’re both in this together.

When your child cries because they don’t want to sleep

Young children can be a bit more challenging as they get older, so try these tips when your child cries because they don’t want to sleep:

Help Your Baby Sleep Through the Night: 7 Tricks
Helping your baby sleep through the night is a challenge for many parents, and it can be especially difficult during those first weeks at home. Read more »
Link copied!
Interesting Articles
Tips for taking care of your baby
When and How to Introduce Gluten into Your Baby's Diet

Tips for taking care of your baby
Is It Possible to Prevent Sudden Infant Death Syndrome (SIDS)?

Sudden infant death syndrome (SIDS) is the unexplained death of a baby less than a year old. Little is known…

Tips for taking care of your baby
Check the Diaper: What Your Baby's Feces Say

Although it might seem crazy to some people, there's a universal theme for parents: baby's feces. It certainly isn't the most common…