Modeling Technique: What You Should Know

Children do what they see, not what they're told. Discover how effective the modeling technique can be in guiding kids' behavior. 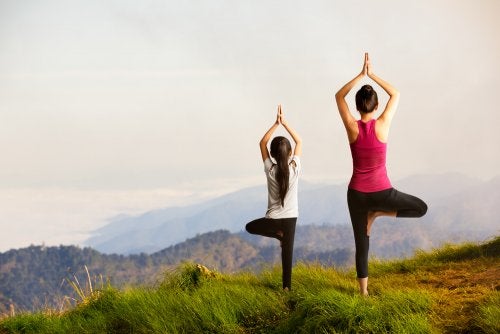 The modeling technique is part of Albert Bandura’s theory of social learning. This author believed that we learn by observing the actions of other people and the results that follow.

This form of observational learning, also known as vicarious learning, is based on imitating the behavior of someone who serves as a model.

This process occurs on a daily basis, and is especially relevant during childhood. Thanks to this theory, we can understand why children do what they see, rather than what they’re told to do.

More than just a natural learning process, the modeling technique is also effective as a therapeutic method for modifying behavior.

What does the modeling technique accomplish?

The modeling technique has several functions:

1. Active or passive. With the former, the subject imitates the behavior after observing it. In the latter, the observer acquires the behavior at a cognitive level, but doesn’t execute it.

2. Participatory or non-participatory. This depends on whether the subjects interact with the model (as occurs in speech therapy), or if they’re limited to observing.

3. Objective behavior or intermediate behaviors. Depending on the degree of difficulty, a model can demonstrate the final behavior, or several simpler intermediate steps.

5. Individual or group modeling. This depends on whether there are one or more subjects observing the behavior.

6. Single or multiple. This depends on the number of models performing the behavior the subject has to acquire. Learning is greater in the second case, as the observer gets to see different behavioral alternatives.

7. Self-modeling. In this case, the observer and model are the same person. This technique has seen great success in treating selective mutism, through the use of symbolic self-modeling. For instance, the observer can watch him or herself performing the action through video montages.

8. Live, symbolic or covert modeling. The observers could be exposed to a live model (a model that is physically present), a symbolic model (the model is present indirectly; for example, in video form), or covert (the subject learned the behavior by imagining the model’s performance).

9. Command or confrontation modeling. This depends on the model’s level of competence. In the former, the model acts without making mistakes at first. In the latter, the model gradually improves his or her performance. The second kind is more efficient, as the observer is able to identify to a greater degree.

How Children Learn Via Modeling
To learn via modeling is also called vicarious learning or learning by observation. Basically, it consists of teaching through one's own behavior. Read more »
Link copied!
Interesting Articles
What should you know?
The Differences Between Convergent and Divergent Thinking