What Are the Differences Between Shy and Introverted Children?

Shy and introverted children have similar behavior in many ways, but the reasons for that behavior are very different. Knowing the differences will help us know how to help them. 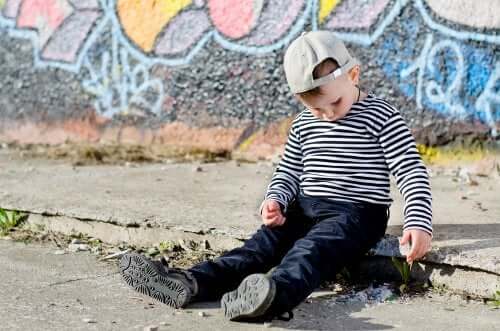 As parents, it should be a priority for us to get to know our children as much as we possibly can. Being aware of the differences between shy and introverted children will help us know what our children need and how we can help them.

For years, shyness has been associated with all sorts of different ideas. When we see a child on their own, and not with the other children at school, then we assume they’re shy. However, quite often this is simply not the case.

Shyness and introversion are often confused because the behavior they cause is very similar. However, the emotional state of a shy child and that of an introvert are two entirely different things.

Shyness is the tendency to avoid social interaction because of embarrassment or fear that others will view us negatively. Shy children are uncomfortable and nervous when they interact with others.

Shy children have little self-confidence, and often lack social skills. Because of this, when they relate to others, they tend to be overly worried about their own actions. They’re afraid to make a fool of themselves.

Because of this, shy children avoid being the center of attention, are nervous about meeting new people, and find it hard to speak freely until they feel that they can trust the people they’re with.

Introversion, however, is when children are quiet, reserved, and introspective. They show little interest in other people and new situations, and tend to be quite distant with other children, unless they’re really close friends.

These children don’t fear social interaction, aren’t afraid of being judged, and can even have very good social skills. They simply feel more comfortable being alone, and often prefer their own company.

They can relate seamlessly with other children and enjoy that interaction. However, what often happens is that, after a while, it becomes too much for them, and they want to be alone. This is their way of recharging their batteries.

The differences between shy and introverted children

Both shyness and introversion make children tend to stay away from their peers. In both cases, they’ll avoid crowds, new people, and new situations. However, they’ll do it for different reasons.

Shy children are afraid of being judged, and introverts aren’t. The fear of being negatively judged by others is a trait of shy people. Introverts feel neither fear nor anxiety when interacting.

A shy child rejects interaction out of embarrassment; an introvert does it because they don’t want that interaction. The former wants to interact with other children but can’t summon up the courage, whereas the introvert simply prefers their own company.

Introverted children can’t cope with too much socializing; shy people don’t have a problem with this – they yearn for it! When they spend a lot of time interacting with other people, introverts need to be alone again to recharge emotionally. Shy children don’t feel this “overload.”

It’s important to differentiate between the “introversion-extraversion” continuum and the “shy-bold” continuum. The former tells us if the person feels more energetic, comfortable and alive alone, or in the company of others. The latter defines whether or not the person feels anxiety when interacting.

It’s possible, of course, for a child to be both shy and introverted at the same time. But it’s also completely possible that, deep inside, they’re extroverted, but their shyness prevents that side of their personality coming out. They may also be introverted but very sure of themselves. They’re two independent categories.

How can we help shy and introverted children?

Introversion is a personality type that generally isn’t problematic. The introverted child is happy spending time alone, and this must be respected. They’ll have few friendships but the ones they have will tend to be quality ones. In addition, their “inner world” will be full of life and curiosity.

On the contrary, shyness does, in many cases, constitute a source of unhappiness for the child. Not being able to relate as they would want to generates anxiety and prevents them from enjoying as many friendships as they would like.

To help them, we need to become social models for them. They need to be able to see how we interact with others and learn from us. It’s also a positive thing to provide the child with different social environments to practice in.

However, if shyness is limiting their life in a serious way, then the best thing would be for them to seek professional help.

Overcoming Shyness in Children, Teens and Adults
Today we want to offer some simple exercises that can help when it comes to overcoming shyness and gaining the confidence you need.  Read more »
Link copied!
Interesting Articles
Childhood behavior
Helping Children Manage Disappointment

Childhood behavior
The Key to Success: An Activity to Motivate Children