How to Overcome Shyness During Childhood

Shyness can develop over the course of different stages of childhood and it can represent a true challenge for some children. It makes it difficult for them to interact with their environment and causes fear in confronting new situations. 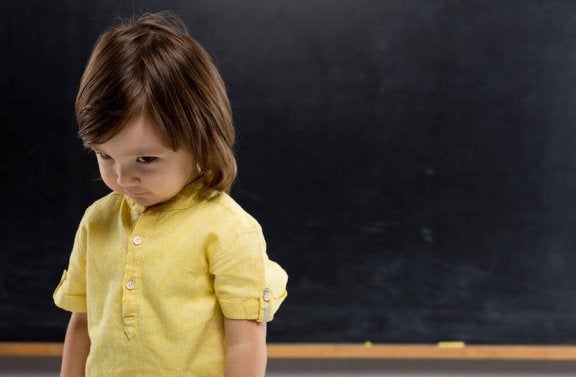 While the origin of shyness can be genetic, children’s parents and environment are highly influential. Therefore, with appropriate steps, children can overcome shyness to a certain extent as they grow up.

Although shyness is a rather common personality trait, for some children it can be a serious problem.

To help children overcome shyness, it’s necessary for parents to understand what happens to children in each stage of childhood.

Signs of shyness in different stages of childhood

Many children are naturally shy from the time they’re born. A large part of their behavior in relation to shyness is due to their neurochemistry. That’s why they become cautious and show predisposition to new situations.

During their first months of life, some babies are more tolerant of company from different people, although those people don’t belong to their common environment. Generally, when someone smiles at them or is friendly, the baby feels comfortable.

In this period, the baby recognizes his parents. However, he isn’t able to identify their faces. Thus, taking care of their needs and demands of attention contributes to the fact that excessive shyness isn’t present in later stages.

When a baby turns six months old, he tends to be very distrustful. Now he recognizes the faces of his parents and of those who’ve spent a lot of time with him. For that reason, a new face is foreign to him or generates insecurity.

In this stage of childhood, it’s very common for the child to feel support and security. He looks for familiar things in the people that he sees all the time. When those people aren’t present, it produces a fear of separation.

Many parents usually force the separation because they fear that their baby will gain absolute dependence. However, that is something the baby should learn on his own. As the baby grows, he starts to feel secure, while manifesting shyness in one or other forms.

Children aren’t used to greeting strangers when they’re two years old. They hide behind their parents, and they need their parents to make them feel secure.

While this behavior is linked to shyness, in reality, children this age are socially selective. If they don’t deal with other children, it isn’t because they don’t want to, it’s that they prefer to play alone.

In general, children tend to get annoyed taking their toys away or behaving badly. Avoiding those situations promotes peace.

However, if shyness in different stages of childhood is excessive, it could be a problem. If the child is three years old and still doesn’t have any social interests, doesn’t play with other children, becomes insensitive to physical contact, and doesn’t express himself with clarity or shows anxiety before new situations, it may be necessary to get the help of an expert.

From three to six years old, the child starts to develop certain intuitive habits, which is why he’s able to have a lot of interaction with others. However, this can also create certain fears, making him more sensitive to coming in contact with others.

He often becomes worried about what others think of him, and he can’t bear negative comments. He’s also scared he won’t live up to the expectations of his loved ones. He may become self-critical, focus on his weaknesses, and think that he lacks courage to face feared situations.

How can one overcome shyness during childhood?

First of all, it’s necessary to take into account how children manifest their emotions. Often, their behavior, the way they play, and drawings can reveal how children feel. This is useful because in the early stages, it’s hard for them to express those feelings with words.

Is it possible to overcome shyness in childhood?

Although it may be worrisome, there’s no way of knowing if a shy child will stop being shy. In many cases, children do overcome shyness throughout the different stages of childhood. As they grow, they tend to open up.

As a mother or a father, you can make an effort by offering stability, support, and affection. If you help your children feel comfortable, they’ll have more confidence to overcome shyness in childhood.