The lessons from Mary Poppins are interspersed in their catchy songs and remain etched in children and parents' memories. They're a source of inspiration even today. 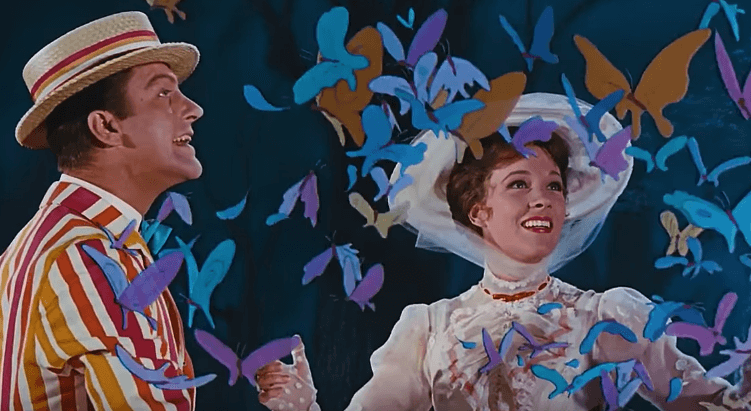 Mary Poppins was a fictional nanny who could travel anywhere with an umbrella giving about affective and musical solutions to life’s problems. The lessons from Mary Poppins have had a significant influence on children and parents over generations.

While it’s true that children can be amazed by the film’s characters and songs, the real message was aimed at other issues. The adventures of Mary Poppins transmitted important advice and teachings that are still practical and relevant today.

The lessons from Mary Poppins – her character and her way of acting and expressing herself – take both parents and their children on a journey through time. Children put themselves in their parents’ shoes and see issues with more responsibility. On the other hand, parents are allowed to see things through their children’s eyes.

The lessons from Mary Poppins

This nanny took on life with a right attitude and believed in her actions. Here are some lessons from her legacy:

She taught us to go through life standing tall. This concept is still unknown to children who haven’t yet managed to control their emotions.

Children also learn to be respectful and to give back with gratitude. The lessons from Mary Poppins show that even a world full of responsibilities can be beautiful and entertaining.

Maintaining that attitude will allow us to see things calmly from a young age. And although life can be hard or bitter at times, there will always be a way to solve our issues or, at least, to cope with the situation at hand.

Each thing in its place

Place or give each item its respective location. Just as a room can be and stay in order, so can life.

We have to look at the role that each family member plays and not be controlling. For example, parents aren’t bad adults; they just tend to forget to see things as children do. And if at any time they’re demanding, it’s because they’re also demanding with themselves. This is because stereotypes still exist and societies create and feed them.

“Life is waiting for you out there. Go and get it!”

Mary Poppins also taught us that you shouldn’t close yourself off in your own world and that, although relationships sometimes don’t go as we want, those who fight are the best allies. Also, as we grow, humans are formed as citizens and owe others respect.

On the other hand, we learn that lying doesn’t work in life because of the damage it causes.

Feelings are also associated with the environment, such as an intense rain or gray sky with sadness and nostalgia, or the cool breeze with a new opportunity.

The lessons from Mary Poppins allow your imagination to soar and you think you can solve anything with a single snap of your fingers. And in the end, even if it doesn’t happen, it will always be a matter of attitude.

The power of imagination

Mary Poppins also taught us how to create a parallel world based on what you want. In it, the imagination is free to plan, form projects, start from scratch, make friends, appreciate interacting with others and even to create your own story.

All this shows that, if you have someone to guide you through life, someone to indicate which path to follow or to teach you how to live your own life differently, that’s your Mary Poppins.

Especially to parents, however busy we may be, the lessons from Mary Poppins show us that we have to grow as people. Something that will contribute to this is for you to dedicate attention to your greatest legacy: children.

It’s not a matter of daydreaming, because life is indeed full of responsibilities. However, your imagination will help you, like Mary Poppins, to always take something out of your bag that allows you to solve any situation. Whenever possible, take things with humor and maintain a positive attitude.

Reading is one of the most important activities in children's lives because it builds their minds. The best gift you…

Raising a child
How to Prepare Your Children for Preschool

Entering preschool is a challenge for any child. A new stage begins and parents are afraid that their little one…