Teenagers tend to immerse themselves in their own world and it can sometimes be difficult to communicate with them. Find out if your child is experiencing emotional detachment in this article. 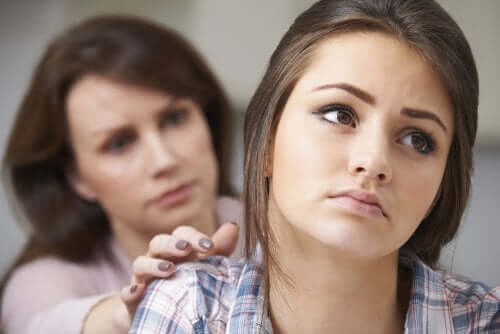 Nowadays, it’s very common to see young people living in their own world. They can become distracted by and totally immersed in social networks. But this apparently normal situation can hide a serious problem: emotional detachment in teenagers.

What is emotional detachment in teenagers?

Emotional detachment is a tendency to ignore (consciously or unconsciously) one’s own and others’ feelings. The reason for this is that the young person believes that only they are responsible for themselves, and this can then lead to a lack of concern for others, and also a lack of empathy. They think they should only be worried about themselves and this implies a certain degree of selfishness.

The other side of the coin is the idea that teens often think they’re the only ones who should take care of their problems. This is why emotionally detached teenagers often have a feeling of false omnipotence. The idea of “I can do everything” governs their lives, which is actually more like “I should be able to do everything.”

How teens relate to themselves

With regard to their own feelings, which are sometimes overwhelming, teenagers often become defensive and disconnect from an emotion because they don’t know how to deal with it. They ignore it, sweep it under the carpet, and continue their life in an automated fashion.

The teenager with emotional detachment isn’t interested in building trust or lasting relationships with others. Interactions are superficial, void of commitment and empathy, as they continue to avoid dealing with their sometimes upsetting and frightening emotions.

This creates a life of inner solitude in which they go to family gatherings, establish relationships, and (especially on social networks) appear to live a full and satisfying life. However, behind it all are many emotions that haven’t been dealt with properly.

For the teenager who feels this way, any form of closeness is a monster to be avoided at all costs. People spend time together, but they aren’t connected. They erect walls to protect themselves from potential risks, but this isolates them from the possibility of receiving understanding and affection.

Even if the teenager is offered genuine love and attention by their family and friends, they’ll continue to feel alone, as they’re not registering it internally.

Symptoms of emotional detachment in adolescents

Where does the emotional detachment come from?

A key factor in this pattern of behavior is having developed an avoidant attachment condition while growing up. Babies whose parents didn’t consistently meet their demands and needs develop a defense mechanism which represses or ignores their negative emotions. This pattern carries over into adulthood and, as a result, shows itself as a lack of trust in others. The result of this is that they withdraw into themselves.

Another point to take into account here is that they reach adolescence without having developed the necessary tools to cope with this. At this stage of their lives, a teenager should start to take on responsibilities and act like an adult. However, if they haven’t acquired sufficient self-esteem or independence, then they might feel overwhelmed by the situation and withdraw into themselves.

The influence of their peer group and the media is also relevant. These tend to support and encourage superficiality and selfishness in relationships.

What can be done?

The main thing you can do is offer your teenager a listening ear, trying to understand them without judging them, and giving them unconditional support. It’s important to give them the freedom to discover their own identity, and experience and learn from their mistakes. You should always remind and show them that their family is a safe haven they can always turn to.

Try to encourage deep conversations rather than small talk or even scolding. If, however, the situation becomes serious, then you’ll need to seek professional help.

How to Teach Children to Identify Their Emotions
Before parents try to teach their children to identify their emotions, they must learn to recognize their own. Read on to learn more! Read more »
Link copied!
Interesting Articles
Emotional education
Solomon Syndrome in Children: What Is It? How Can You Avoid it?