Symbolic Play in Children with Autism

Children with autism can have difficulties to develop symbolic play. Learn more about this in today's article. 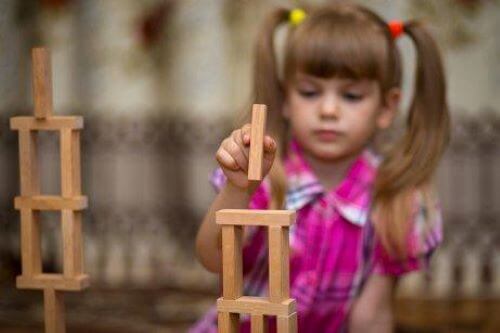 Autism is a neurobehavioral disorder that makes it difficult to communicate and socialize with others. There are restricted interests and repetitive behavior. In many cases, these symptoms prevent children with autism from fully developing symbolic play.

Games and role-playing can help children in their developmental process. There are many useful abilities and skills that children can learn through symbolic play.

Symbolic play is about creating scenarios that simulate daily life or are based on things the child knows like stories, movies, etc. It can involve using objects or role-playing stories. This way, children can reflect on what they’ve learned about the world and how they interpret what they know.

This type of game is a very typical game in childhood. Besides being the best way for children to express themselves, this kind of play is essential in developing their creativity and imagination.

How is it developed?

Pre-symbolic play starts to develop after the first year of life. This phase implies using simple objects and toys. Kids use this to pretend they’re something or someone else. For example, drinking from an empty glass, pretend to be talking on the phone, etc.

Little by little, after their second birthday, children use these toys and objects along with toys like dolls, for example. They start copying what they see using people or dolls. After this, they’ll start to role-play. They’ll usually start pretending to be teachers, firefighters, doctors, etc.

By the age of four, this type of play gets a little more complex. Children will make more elaborate games, with even more characters. In short, symbolic play starts developing during the early years of childhood and continues throughout.

Symbolic play in children with autism

As previously said, the ability to create stories through imagination usually starts developing from the age of two. It appears to be innate, then it gradually develops and becomes a complete theory of the mind. Although this isn’t the case for most children on the spectrum.

Children with autism can have some difficulties to develop their imagination and they need a little bit more help to reach their full potential.

These are some of the strategies you can use to develop and stimulate symbolic play in children with autism:

Children with autism can develop symbolic play. Help them through games or stories and you’ll see an improvement in their social skills.

6 Mind Exercise Games for Children to Play at Home
Mind exercise games are an excellent way to boost your child's intellectual development. Discover today's homemade games to stimulate your little ones.. Read more »
Link copied!
Interesting Articles
Emotional education
Solomon Syndrome in Children: What Is It? How Can You Avoid it?