What Is a Child's Imagination? 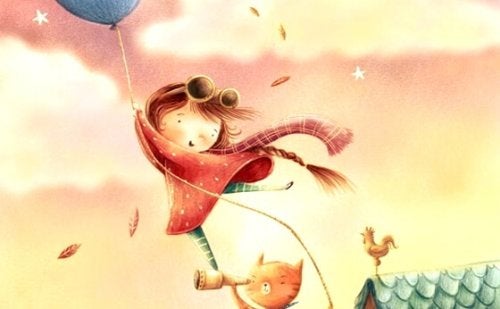 If there is something that children excel at, it’s their ability to imagine and create their own worlds. In this article, we’ll review the different stages of a child’s imagination and how to stimulate it.

Fantasy and intuition are the main characteristics of our youngest ones. Imagination is part of a child’s day-to-day activities.

Imagination is the most common quality found in children – it’s their way of communicating with the world that surrounds them.

No matter what a child’s reality might be, they’ll always have their own perception. A place where imagination takes them by the hand to guide them through a myriad of experiences.

Here we’ll discover all the things that encapsulate the marvellous universe of a child’s imagination.

What is a child’s imagination?

The strange and abstract are what envelop the definition of this word. Why? Because imagination is a concept in which limits and logic are non-existent.

It surges from children’s impulses and constant need to enlarge their cosmos… going beyond the known, and what is seen and experienced.

A child’s imagination has its peak when they create original and witty ideas, also known as “thinking beyond.”

Characteristics of a child’s imagination

Imagination consists of two factors. One is external (the child’s surroundings) and the other internal (their impression about the world).

That’s why we can see their imagination at work when they play, tell stories, eat or dress. Their perception and subjectivity are some of the most remarkable characteristics of their imagination.

There is a difference between these two. As we previously stated, imagination arises from one’s perception and reinvention of realty. Fantasy, on the other hand, arises from the imaginative function of thought.

Therefore, it isn’t linked to their surroundings. Although both fantasy and imagination are related, it’s important for us to differentiate them since they develop during different stages of childhood.

Imagination is still present (although not so obviously) in a teenager’s life, however fantasy disappears a little earlier during childhood. That’s why it’s so important for children to enjoy their early years.

The development of a child’s imagination

That’s why many studies indicate the importance of the first three years of a baby’s life. This is the perfect time to “condition” many different experiences during their childhood.

Experiences such as listening to music in different languages, reading, playing, walking or any other activity that will favor the development of their brain connectivity are recommended. This stimulation will in turn help develop their imagination.

The way imagination develops in babies is quite difficult to define. Imagination starts to develop when we expose them to scenarios where they can recognize themselves as the protagonists.

For example, this can be when a parent or teacher uses fantasy to tell stories. This will help strengthen their brain to create “imagination connections.”

Imagination in children from 1 to 3

Imagination in children of this age is to a large degree based on imitation. Therefore, their first experiences with imagination will be imitations of what is happening around them.

When your dog barks, they’ll want to bark as well. This kind of imitation helps them develop their imagination.

During this stage, archetypal patterns begin to appear in their games. For example, some children will play house, feed, bath and take care of their dolls as if they were babies.

During this stage, their instinct to socialize opens the doors to group play. This way children can imagine together. Curiosity for new experiences is their main motor.

Imagination in school children isn’t centered around imitation since they can now imagine with more audacity. Their imagination during this stage will be more abstract.

One of the main characteristics of autism is resistance to learning. As a result, autistic children evade reality by living in an imaginary world on a daily basis.

The way in which autistic children imagine is a lot more complex. It is also less obvious since they lack language and motor skills in some cases.

Their imagination can be quite different since it stems from logic and reason. The way they imagine is still a subject that is being studied by neuroscientists.

How to increase a child’s imagination?

The loss of self-confidence, lack of encouragement and rigorous patterns at home or at school can lead to the fatal loss of a child’ imagination.

A parent can also reduce a child’s imagination if they constantly judge their creations or if they don’t allow them the freedom to create without logic.

In order to avoid this, it’s important to let children discover. Allow them the freedom to choose what they like and feel comfortable with.