A Summary of Tectonic Plates for Children

Plate tectonics is one of the most relevant scientific theories of the 20th century. It manages to explain the Earth's crust movements and its transformation process. 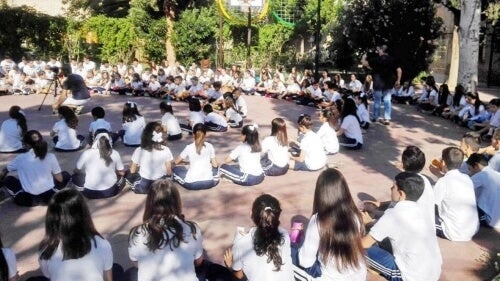 Planet Earth is full of life, constantly changing, and about 4.5 billion years old. Some changes take hundreds of years to happen, while others can happen in seconds. Mountains, plains and volcanic eruptions are transformations that can be explained in this summary of tectonic plates and the plate tectonics theory for children.

What are the tectonic plates?

Plate tectonics is a scientific theory that explains how Earth transforms and reorganizes its surface, the lithosphere, in a continuous process of creation and destruction. Dan Mackenzie is one of the key players in finding out how mountains and oceanic depths form. More than 50 years have passed since these discoveries were made, but new technologies will show us how Earth formed.

Earth has 4 solid and liquid layers surrounded by another layer of gas. These 4 layers are the geosphere, biosphere, hydrosphere and the atmosphere. In this article, we’ll talk about the sublayers in the geosphere, to better understand plate tectonics.

Where can you find the tectonic plates?

The lithosphere is made by, at least, 57 rigid plates of many sizes, 15 big plates, and 42 lesser plates. When they clash together, caused by their movements, they transform the Earth’s crust. The most important ones are the African, Antarctic, Indo-Australian, Eurasian, North American, Pacific, and South American plates.

How does the lithosphere move?

Tectonic plates move because of convection currents and gravity. The lithosphere rests upon a plastic layer called the asthenosphere. When it gets hot, it dissolves some rocks, this makes the plates move and causes other less dense materials to go up. But once they get cold, they go down again. This is what you’d call a convection current.

So, plates are rigid parts of Earth that float around the liquid part of the asthenosphere, causing earthquakes, and volcanic eruptions once they reach a limit. There are three limits, and they depend on why the plate has moved. For example, faults can be divergent (separations), convergent (alignments), or transformative (parallel movements).

Transformation of the crust by tectonic plates

John Tuzo, a Canadian geologist and geophysicist, was one of the main authors of the current theory of plate tectonics. His investigation justified parallel and perpendicular movements in borders. This made it easier to understand what happens on the plates’ faults.

These happen when the tectonic plates move and clash head-on, causing an elevation. For example, this is how the mountain ranges of the Himalayas formed 55 million years ago, when the plates from Asia and India clashed.

If oceanic tectonic plates split, this creates a hole in the earth, like a crack, and magmatic rocks come out to the crust’s surface, creating a new oceanic crust. Thus, this is how the mid-ocean ridges that connect oceans form.

On the other hand, if two continental plates split, they create a deep hollow area, like the Great Rift Valley. In a million years, these kinds of movements will split the eastern part of the African continent.

In these areas, plates don’t clash, their movements are parallel and against each other. This causes earthquakes, some minor and others incredibly high, like Chile’s 9.6 in 1960, or tsunamis, like Indonesia’s 9.3 in 2004. One of the most important transform faults on the planet is the San Andreas fault.

We hope that this simple summary of the theory of plate tectonics for children will be of great help to understanding and learning about Earth’s transformations.

The Theory of School Organization and Its Characteristics
To understand how schools work, you need to know about the theory of school organization. In this article, we'll talk about its main characteristics. Read more »
Link copied!
Interesting Articles
Postpartum
Postpartum Anxiety During the First Months of Your Baby's Life