9 Alternatives to Avoid Yelling at Your Child

Often, work, fatigue and other problems make you feel irritated and you may take it out on your children, but this only makes the situation worse. 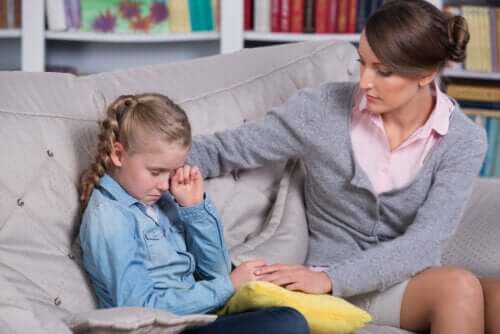 Often, tiredness, lack of patience, and anger make us yell at children. Sometimes it seems like this might be the easiest way to feel authoritative and get attention quickly. However, nobody likes being yelled at and yelling doesn’t do any good either. Now, we’re going to look at some alternatives to avoid yelling at your child.

Your child will always learn better if you discuss with them in a constructive way without yelling. In the end, yelling only generates stress and fear in a child and that’s not what you’re looking for. Sometimes (it happens to all parents sometimes!) you might lose your cool and yell, even when you know you shouldn’t.

We’re going to look at some tips to avoid yelling at your child below.

Tips to avoid yelling at your child

The first thing to keep in mind to avoid yelling at your child is that you shouldn’t and that yelling isn’t beneficial. For example, if you think yelling is beneficial for discipline, these tips won’t help you much.

Recognizing that you sometimes resort to yelling when you’re feeling nervous, angry or tired is the first step to avoid yelling. This way, every time you’re about to yell, you can do your part to prevent it.

Yells are an expression of anger and rage. If you let yourself be carried away by this emotion, you’ll end up exploding like a volcano and resorting to yelling.

What can you do to avoid this? You have to direct that anger towards something else. For example, you can use relaxation techniques, mindfulness or meditation.

Work on patience to avoid yelling at your child

Yes, you can work on becoming more patient. Patience isn’t something you’re born with. Patience, like everything else, is something you can practice by controlling your emotions and being determined. If you do this, you’ll have more patience every day.

Don’t take out your problems on your children

Sometimes you might come home from work tired or irritated and you end up taking it out on someone else, even though you shouldn’t.

Children often get the short end of the straw after a long day at work. As a result, you should try to relax before entering the house. For example, you can do some breathing exercises to help calm down.

Don’t bring yourself down to your child’s level

Remember your own age and your child’s age. You should never put yourself on your child’s level. Children do childish things and make mistakes, like everyone. Your job is to help them correct these mistakes and guide them.

This technique is commonly used with children, but you can also use it. When you feel angry or on the verge of yelling, think of a turtle crawling into its shell. Then, count to 10 until you calm down.

You should never forget that parents are role models for their children so it’s important to ask your child for forgiveness when necessary. This way, you’re also teaching them to ask for it too.

Never lose respect for your children

If you end up yelling and speaking badly to your children, you’ll lose respect for them if you don’t actively try to maintain it.

Why you should avoid yelling at your child

On how to avoid yelling at your child

As you can see, yelling doesn’t bring anything positive. In fact, it damages a child’s self-esteem, makes them fearful, and can even make them aggressive. As a result, it’s important to avoid yelling at your child.

There are many alternatives that can help raise a happy, healthy child while respecting their self-esteem. Discipline has to be based on respect, not on screaming and fear.

5 Things I Learned When I Stopped Yelling at My Kids
Sometimes, the burden of our daily lives causes us to forget the wonderful work we have before us as parents, and we end up yelling at our children and arguing with them. Read more »
Link copied!
Interesting Articles
Tips for raising your child
Give Children Options: Don't Tell Them What to Do