How to Resolve Communication Problems Among Parents

It's fundamental that families resolve communication problems between parents as soon as possible. Today we'll tell you how. 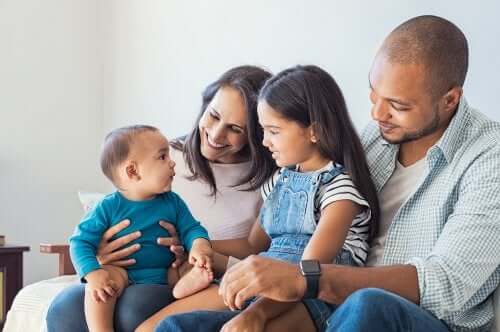 Communication problems among parents can cause misunderstandings that constitute severe problems within a family. The relationship between parents deteriorates and children feel insecure because they can’t completely trust their parents.

It’s not necessarily an issue of one parent taking the same side as the other parent. On occasion, it’s about one parent not backing up the other in front of their children.

Even when parents aren’t in agreement about something, in particular, they still need to support one another. If they have any differences regarding their children’s education, they should talk about it in private, not in front of their kids.

When there’s a lack of support in communication

When one parent doesn’t back up the other or offer his or her support in certain circumstances, it’s normal for children to see him or her as “the bad one” or “the weak one,” etc.

Communication problems among parents aren’t just about arguing in front of your children. Most of the time, it includes subtle behaviors or communication “styles” that send a harmful message.

Many parents have a hard time dealing with the problem because they don’t know how to express their discomfort with words. Often, they have the “feeling” that they’re not in a cooperative situation, but they can’t clearly see the pattern.

Types of communication problems among parents

In a game of cards, the player that wins has a card that beats all the rest. This person always wants to have the final say about childraising or about a disciplinary situation regarding the other parents. Sometimes, this happens when the other person becomes the new authority figure in the conversation by yelling or imposing a punishment.

Under the erroneous sensation that one parent is causing a child to suffer emotionally, the other will assume the role of offering false security – providing some type of relief during a difficult situation. Parents may also try to offer their children false security in other ways.

For example, this parent may allow the child to use the computer after it’s been prohibited, or give attention or comfort when the child’s in the middle of a tantrum. Offering true false security is reducing your own feelings of discomfort or anxiety onto the child’s situation.

Parent analyzers will have private conversations with their children regarding the other parent. They may outright complain about the other parent or use less obvious tactics. For example, they may say things like “I don’t like it when he’s in a bad mood either.”

This childraising approach keeps the analyzer from having a direct conversation with his or her partner about what’s bothering him or her. In situations where parental behavior is truly dangerous, analyzers will communicate with their children this way rather than taking the terrifying step of getting out of the situation.

This type of communication involves gathering with other people in the family to talk negatively about a parent that’s trying to affirm his or her authority. At the dinner table, the alienator may even encourage children to disagree with the other parent’s point of view.

At times, the alienator will subtly encourage all of the children to gang up against the other parent. Given that the alienator is generally in a position where he or she can relieve the authority in a situation, the children will naturally align with him or her. It’s crucial that parents resolve these problems as soon as possible.

“The greatest marriages are built on teamwork. A mutual respect, a healthy dose of admiration, and a never-ending portion of love and grace.”

How to resolve communication problems among parents

It’s almost impossible to deal with communication problems among parents in the middle of a childraising situation. Trying to address the childraising mistake often ends in an argument or a premature end in order to resolve the child’s situation.

When families grow, these unresolved communication issues become even more complex. With that in mind, the simple suggestions below can help parents get on the right track regarding communication and shared childraising:

When it comes to communication problems among parents, don’t forget…

“Unity is strength… when there is teamwork and collaboration, wonderful things can be achieved.”

Why Is Family Communication So Important?
Undoubtedly, striving to create and encourage good family communication is beneficial in many ways. Discover why in this article. Read more »
Link copied!
Interesting Articles
Conflicts
Detecting Family Problems: The Role of the School

Spending a lot of time with your partner, always doing what your partner wants, and losing your personal space... These…

Conflicts
Coming to an Agreement About a Child's Upbringing

Shaken baby syndrome (SBS), also called abusive head trauma (AHT), is considered a clear case of child abuse. In this article, find out more about these situations that can end…