The Stages of Sleep in Babies and Children

Sleep is important for babies and children as it helps regulate and repair their bodies and makes it possible to control bodily energy and temperature. It also helps them assimilate what they've learned during the day. In this article, discover the stages of sleep in babies and children. 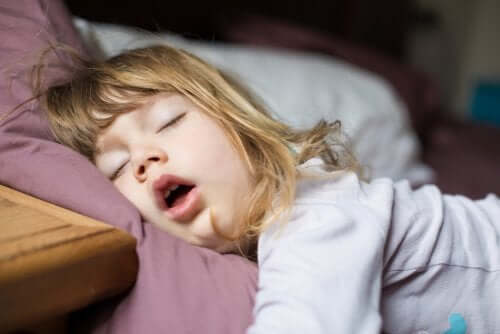 The stages of sleep in babies and children contribute to bodily regulation as well as repair and help control energy and body temperature. Therefore, it’s preferable for little ones to go at their own pace.

You’ll help your children rest better if you respect these stages of sleep. If you try to change them, you may even affect their development. During sleep, memories and learning are stored. Sleep strengthens the body and helps children mature both mentally and physically.

The two stages of sleep in babies differ from the five stages of adult sleep. This is because a baby’s body needs frequent nourishment, which is why babies wake up during the night to eat and then continue sleeping. Sometimes, they open their eyes to seek their mother’s warmth.

The stages of sleep in babies and children

The varying stages of sleep depend on the baby or child’s age. Some sleep cycles are lighter, while others are deeper.

These stages also depend on the child’s health and development. Teething, for example, can interrupt the stages of sleep.

As babies grow, REM sleep stages decrease. At two months, babies can sleep peacefully for one-hour periods and then eat when they’re hungry. Thus, they don’t distinguish day from night.

To make sure these intervals don’t become a habit, don’t interrupt their sleep. You should know that it’ll be really hard to try to make your children fall asleep when they don’t need to. Sleeping at their own pace makes things easier and avoids tantrums. Thus, changing children’s sleep patterns is very harmful.

If babies don’t sleep well, they’ll suffer from future physical and mental problems. The importance of making sure that babies and children sleep well and enough has been demonstrated.

You need to create an ideal sleep environment for children to be comfortable and sleep at their own pace. Make sure you’re aware of the moment when they wake up and when they want to sleep so they don’t establish their own routine.