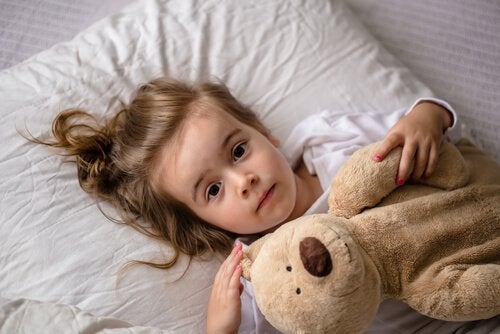 Exhaustion, stress, anxiety, fever and changes in daily routines often trigger sleep disorders. Sleepwalking is one of the most frequent.

Sleepwalking can start between 4 and 6 years of age, with a higher incidence in males than in females. It usually disappears in adolescence, although there are some exceptions.

A child with this parasomnia doesn’t walk like a zombie, with arms outstretched, as people often believe. They often walk, sit, dress, talk, open drawers and even leave the house, while they’re still asleep. Their eyes will remain open, but they will be disconnected, staring into space.

Some scientists associate this disorder with the immaturity of the central nervous system, but this hasn’t been proven. What is clear is that it isn’t related to mental or emotional problems. The only risk is having an accident while walking.

When does it happen and how long is a bout of sleepwalking?

Generally, during a bout of sleepwalking, children will unconsciously imitate things they’ve done during the day. Some common actions are picking up their bag to go to school or opening the fridge for a glass of milk. Once they’ve carried them out, they may get back into bed, or continue sleeping elsewhere.

Like the so-called night terrors, sleepwalking occurs during phase IV of non-REM sleep. This is the deepest stage of sleep, in which brain activity is slower and muscle movement is reduced. That’s why people have an impassive look on their face and their vision doesn’t process the sensory feelings.

These episodes can last just a few seconds or even up to 30 or 60 minutes. While sleepwalking, children will act like a robot. They will murmur and mumble, and the only command they may respond to is to return to their room. The strangest thing of all is that when they wake up, they won’t remember their nocturnal adventures.

How can we detect the disorder?

When considering the causes of sleepwalking in children, doctors often talk about factors such as sleep deprivation and fatigue. They also mention family inheritance, clinical conditions such as seizures, and stimuli such as caffeine.

What happens during sleepwalking is that the brain is asleep, but the body wakes up. Thanks to this, the individual carries out certain bodily movements without intervention from the brain. However, there are no specific diagnostic studies that can be accessed regarding this disorder. The actions of the sleepwalker are indicative enough of its presence.

What is the ideal treatment?

Infant sleepwalking doesn’t usually have negative consequences and usually ceases over time. However, we should always be looking to improve a child’s sleep in order to guarantee healthy rest. In addition, safety measures should be put in place to prevent falls or other accidents while sleepwalking.

If children reach adolescence and this disorder still persists, then it may be necessary to see a specialist who can suggest therapies based on research into early awakening insomnia, exercises or pharmacological treatments. Remember that factors such as smoking and alcoholism can favor this disorder.

Suggestions for dealing with childhood sleepwalking

The main recommendation that specialists make is not to wake the child during the first 5-15 minutes of the episode. In doing so you may trigger a panic or anxiety attack. Ideally, take the child carefully to his room so that he doesn’t get hurt.

Some precautions to take include:

Infant sleepwalking is quite common, but not dangerous. It tends to be occasional, and the vast majority of children get over it with a little help.

If it becomes a normal occurrence, one option is to take note of the time the child normally does it, and try waking him 15 minutes earlier. In this way, you can break his sleep cycle, with the hope that he’ll adopt a different one without sleepwalking. The key in all of this is, above all, to stay calm.