The Consequences of Not Sleeping Well in Adolescents

Sleep is a fundamental part of development during adolescence. In today's article, we'll explain the consequences of not sleeping well during this stage. 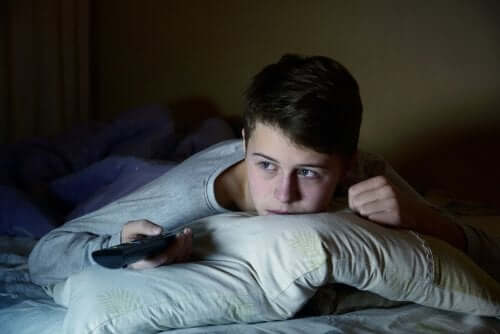 Sleeping is an action that we perform automatically every day. It’s very important in regenerating the mind and body. Sleep is fundamental for any person, but this is especially true for those who are in the midst of their development. Therefore, we’ve put together the following article to address the consequences of not sleeping well in adolescents.

During this stage, children go through a variety of physical, psychological, emotional and social changes. These changes can also affect the quality of their sleep.

Why do teenagers have problems sleeping?

When we sleep, over the course of the night, we go through 2 alternating sleep cycles:

In this sense, deep slow-wave sleep is the most important phase. The basic function of this sleep phase is to reduce cerebral metabolism and allow the brain to rest. Furthermore, experts believe that REM sleep is related to brain development and learning.

These phases may easily become altered when it comes to teens. The reasons have to do with the poor sleeping habits and social demands that young students experience today.

Proper sleeping habits involve a series of necessary practices. These practices allow teens to maintain a normal state during nocturnal sleep and during daytime vigilance.

When teens have difficulty sleeping well, the reasons may have to do with the following:

“Adolescence is the great and terrifying transition from childhood to adulthood. It is in the interest of civilized society that a mature, responsible and well-educated young adult emerges from this transition. Along with mental and physical maturation, a triumvirate of preventive health should be inculcated during adolescence as a permanent philosophy of living. The practice of nutritional health will ensure the best possible outcome during the process of growing older. Exercise and physical fitness, likewise, will also foster health and quality of life. Healthy adequate sleep will foster longevity and particularly the optimal use of our waking hours. We are not healthy unless our sleep is healthy. Sadly, the inculcation of this third member of the triumvirate of preventive health is absent.”

If you think about it, our modern society is one of high demands. So, it’s quite possible for academic and social demands to affect a teenager’s sleep.

Many of them participate in a variety of extracurricular activities or spend their afternoons with friends. This keeps them from fulfilling their academic obligations during the day.

In fact, many young students spend their nights awake doing homework or preparing for tests. But, paradoxically, not getting enough sleep correlates with poor academic performance.

This is because teens need optimal amounts of quality sleep in order to obtain and process information adequately. This is key in facilitating the learning process.

The consequences of not sleeping well in adolescents

During the school year, teens must face long hours of school day after day. If they don’t sleep well the night before, this will undoubtedly have a negative impact on their school day.

The harmful consequences can include the following:

In conclusion, the consequences of not sleeping well in adolescents are serious. It impedes the proper functioning of their bodies and minds, producing cognitive and motor dysfunctions.

It also affects their mood, and daily life in general. Therefore, it’s important to try to solve sleep deprivation problems during adolescence. Otherwise, they may only get worse in adulthood.

Co-Sleeping or Bed-Sharing: What’s the Best Option?
Deciding between co-sleeping and bed-sharing is a personal decision. We'll talk about what to consider to help you decide what's best for you. Read more »
Link copied!
Interesting Articles
The importance of sleep
The Importance of Rest in the Learning Process

On the one hand, resting implies sleeping well, which is a vital and necessary bodily function, both physically and mentally.…

The importance of sleep
Children and Sleep: Common Problems and Solutions

Sleeping is one of the most important and necessary activities for human beings. During sleep, we organize and assimilate all…

The importance of sleep
What Time Should Children Go to Bed on a School Night?

When children go back to school, they face many changes in their routines. One of the most important changes is…