Differences Between Identical and Fraternal Twins

Due to the increased use of assisted reproductive technology, the incidence of identical and fraternal twins has increased. Do you know the differences between them? Discover them here! 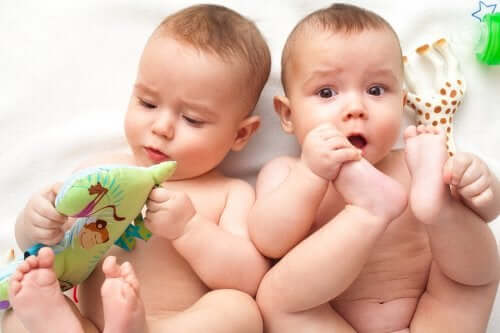 Differences between identical and fraternal twins

Twins aren’t always identical. In fact, they can differ in many ways. The two kinds of twins can be distinguished mainly by their development.

Identical twins can be very similar in almost every way. However, due to environmental factors, they can sometimes change their appearance and only look somewhat alike. Meanwhile, fraternal twins, just like other siblings, are different.

These siblings don’t have an exactly similar genome. In fact, both twins’ blood cells may have differences in their DNA sequence.

If they receive inconsistent nutrition during gestation, both twins’ appearance may change during growth. Although some identical twins can be of different gender, most of them are of the same gender.

Dizygotic twins stem from the fertilization of two different eggs by two different sperm. Fraternal twins’ genomes are different, as they’re siblings who were conceived at different times. Also, they can be of the same gender or of different genders.

The odds of conceiving identical twins is the same worldwide: they occur in three out of every thousand births. However, the odds of having fraternal twins varies due to several factors, including the home country.

In addition, now it’s more common for mothers over 35 years old to conceive fraternal twins. This possibility is boosted in pregnancies through in vitro fertilization (IVF).

It’s important to note that fraternal twins can be conceived when a woman releases more than one egg during her menstrual cycle. Therefore, if you’ve already had fraternal twins, you’re four times more likely to conceive them again.

Some drugs such as clomifene may increase the likelihood of having fraternal twins by 10% since they cause superfecundation.

Is it risky to have identical and fraternal twins? Yes. However, the gestation period is successful in most cases. The survival rate of twins is 60%. However, there’s a risk that the umbilical cord will tangle around the babies, which can restrict oxygen flow and cause brain damage.

On the other hand, they’re at risk of low birth weight and preterm delivery. In addition, the gestation period is usually 38 weeks instead of 40 weeks. Therefore, you should go see your doctor for regular checkups and follow their instructions carefully.

There’s no scientific evidence that conceiving identical twins is genetic. However, a woman is more likely to have fraternal twins if there are cases of twins in her immediate family, as it’s a consequence of superfecundation.

In conclusion, several characteristics help distinguish between identical and fraternal twins. By analyzing the factors described here, you can easily establish your case.

8 Fun Facts About Twins You Might Not Know
According to statistics, three out of every thousand pregnancies are identical twins. Discover interesting facts about twins that you might not have known! Read more »
Link copied!
Interesting Articles
Preparing for childbirth
Self-Hypnosis in Childbirth: What You Should Know