The Important Role of Friendship in Adolescence

Friendship in adolescence has a basic function, as adolescence is a stage of change, during which teens need to feel that they fit in. 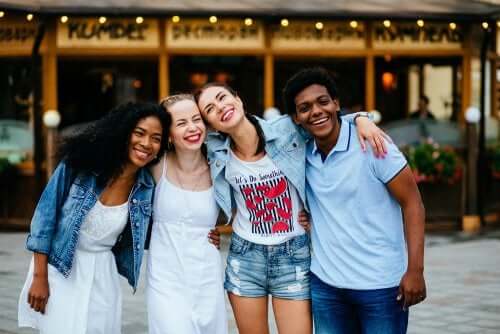 Friendship in adolescence has a basic function. Humans need to feel that they “fit in.” This need becomes more urgent during adolescence.

Adolescents who have a hard time establishing friendships often have school, self-esteem, and self-concept issues, as well as possible emotional disorders in adulthood.

“Adolescence is a stage that has been progressively prolonged, during which fast and big changes occur, that lead human beings to become biologically, psychologically, and socially mature, and potentially able to live independently.”

Adolescents are in a constant state of indecision during which they explore various alternatives, unable to follow through with any of them. This leads them to adopt suggested or imposed beliefs until they find those they really identify with.

Adolescence can be divided into three stages:

The role of friendship in adolescence

At the beginning of adolescence, a period of rebellion begins and teens begin to set themselves apart from their family. Thus:

As adolescence progresses, the need to identify with their peer group intensifies. Thus, the greatest influence the adolescent receives comes from their social circle, in both a positive and a negative sense. Therefore, they adopt the group’s identity, straying from what was familiarly established:

In the last stage, their personality integrates. This will depend on their experiences and obtained support (both family and social). Friendship at the end of adolescence is characterized by a loss of influence. Thus:

In the first stage of adolescence, teens are greatly concerned over their appearance and the changes that are happening in their bodies. They need to know that what’s happening to them is normal, which is why they compare themselves to others. Also, their sex drive increases, as well as the need to experiment and define their gender role.

In the next stage, teens accept their new body, which is why they start needing to experiment sexually. Also, they start flirting and begin relationships, which can be romanticized.

In the final stage, love relationships tend to become more intimate and stable. They’re based on shared interests and similar values.

Parents and friendship in adolescence

Research has evidenced the qualities that parents should have so that their children don’t stray from them during adolescence: