Why Are Teens Embarrassed by Their Parents?

With the arrival of adolescence, many behaviors begin that are upsetting to parents. Today we'll look at why so many teens are embarrassed by their parents when in public. 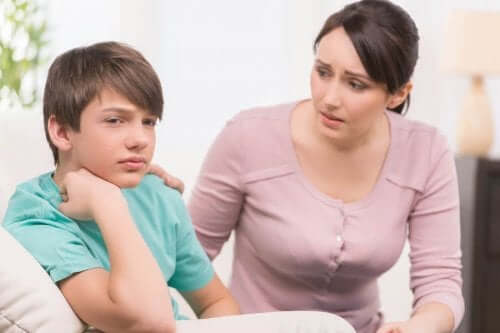 When children are young, what they want most is to be close to their parents. Yet just a few years later, as teens, they often don’t want to go anywhere with their parents – let alone show affection in public. Why are teens embarrassed by their parents?

Children often idolize their parents when they’re young. But during adolescence, they tend to feel embarrassed by them. They criticize their clothing, and are ashamed by their jokes and comments.

This sudden change in dynamics can be very disconcerting for parents. However, it’s very common. It’s part of the process of growing up and children’s quest for independence during adolescence.

Signs that children are embarrassed by their parents

With the onset of adolescence, children develop new ways of behaving. It’s very common for them to start avoiding certain situations with their parents, especially in front of their friends. It’s as if, all of the sudden, they’re embarrassed by their parents. And they’ll even start to express it through looks, gestures, and just straight out saying it.

Some everyday situations produce typical reactions in teenagers and are a clear sign that they’re going through this stage. This occurs in the majority of teens and shouldn’t be cause for worry.

A common scenario is when parents drop their kids off at school. Teens start to ask their parents not to accompany them, or not to leave them right at the entrance, but farther away. When they get out of the car, they avoid goodbye hugs and kisses.

They also avoid going out in public with their parents, and especially public displays of affection with their parents when others are present. For example, if they’re in the supermarket and a classmate shows up, they may feel very uncomfortable and avoid contact at all cost.

“When  your children are teenagers, it’s important to have a dog so that someone in the house is happy to see you.”

But one of the worst moments for teens is when their parents talk about how perfect they are, or tell stories about when they were little. The disapproving looks and gestures appear immediately.

Why are teens embarrassed by their parents

All of these behaviors – which are very frequent in teenagers – are perfectly natural. Being ashamed of displays of affection is quite normal. For adolescents, it’s a way to start establishing their independence and space. It’s a sign they no longer want people to treat them like children.

When adolescence arrives, what were once children now begin to place greater value on their experiences. They become more critical of themselves and others.

It’s also common for teens to make comparisons with other families. What’s more, they may get along better with their friends’ parents during adolescence than they do with their own. Other parents always seem better, more understanding, more fun…

How to face this period

For some parents, this phase in which their children are ashamed of them can be truly difficult to deal with.  However, it’s important to remain calm and understand that it’s part of a completely natural process. While it may seem hard to believe, this too shall pass.

The best way to deal with your teenager’s embarrassment is to be patient and not question his or her behavior. Confronting them will be a mistake, as they’ll just reaffirm their position and become more self-absorbed.

In order to treat this temporary situation, it’s best to dismantle the embarrassment indirectly. Listen to your teens and allow them to express themselves. Good communication is key in getting through this complicated time.

Fear of the Future During Adolescence
If you notice that your teen is anxious, they may be worried about their future. Read on to discover how to help teens overcome their fear of the future. Read more »
Link copied!
Interesting Articles
Understanding your teen
4 Mistaken Beliefs About Adolescence

Understanding your teen
Communicate with Your Teenager with Magic Words

Communicating with your teen can be tricky. When talking to them, ask them what they plan to do instead of…

Adolescence is a stage that's full of social and psychological changes that young people experience. It's a developmental stage that follows…