For most parents, taking a child to a group home for teens with behavior problems is a very difficult possibility to consider. Often, they know it's what they need to do, but they have a hard time accepting it. 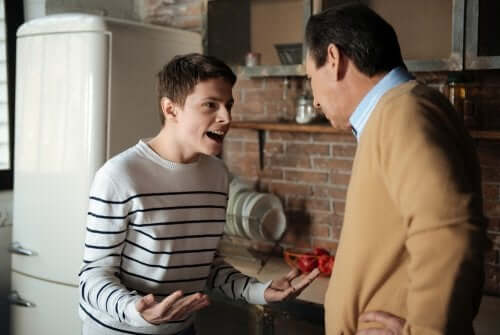 In the following article, we’ll share some information about group homes for teens with behavior problems, so you can get to know a bit more about this option if you’re considering it.

Adolescence can be a very conflictive stage in a child’s life. Some youth are especially rebellious and this can be a very difficult situation for their parents to handle. When behavior problems arise, one of the worst things that parents can do is ignore the issue. But they often do so in order to avoid arguments and confrontations.

However, this attitude can gradually lead bad behaviors to become habits that, over time, will be impossible to change. When the situation gets out of control, seeking professional help is crucial.

Many parents and teachers find themselves in the face of truly complex situations due to behavior problems in teens. It may seem like a new problem – a modern-day problem. However, nothing could be further from the truth.

What is a modern-day problem is the fact that behavior problems in teens often go untreated.

When rebellious teens violate basic norms of conduct in a conscious and intentional way, parents and responsible adults are generally complacent. In the face of a teen’s first acts of mischief and disrespect, adults often close their eyes and brush it off.

When they do so, they fail to correct or even analyze the child’s behavior. Many times, this is because they’re afraid of confrontation and of how the adolescent will react.

When to seek help

The first thing you should do if your child is displaying behavior problems is to keep your parent-child relationship from deteriorating. The best way to prevent that is by seeking the help of a psychologist who specializes in these kinds of conflicts.

Behavior problems in teens originate from a series of factors that interact with one another. Some of these causes have to do with their upbringing while others have to do with a teenager’s personality.

In practice, when a teen starts to pick up bad habits, family dynamics become more difficult. The natural reaction of teens is to close themselves off and become even more rebellious. That’s why it’s so important to look for help.

The support of a specialized psychologist can help parents find the courage to make the right decisions. For adolescents, this is also a positive situation because they feel listened to by someone who isn’t part of their family and doesn’t judge them.

Red flags when it comes to teens with behavior problems

When living with a troubled teen becomes more and more difficult, it’s important to pay attention for warning signs. Parents need to know when to take action. In some cases, group homes for teens with behavior problems can be of great help.

In general, teens with behavior problems are irritable and reluctant to communicate. Understanding between them and their parents becomes extremely complicated. Troubled teens are also likely to lack motivation in school. And they may appear sad or anxious for no apparent reason.

When teenagers experience behavior problems, they often seem disinterested in their future. Often, parents suspect drug or alcohol abuse. Another sign is a poor relationship with food –when teens start to eat too much, or not enough.

What is the purpose of group homes for teens with behavior problems?

Group homes for troubled teens are an option for parents who need help dealing with their children’s behavior problems.

These centers, in general, help youth to develop self-control techniques through a variety of methods. They also work on the development of certain social skills as an alternative to aggression – for example, asking for forgiveness, negotiating, helping others, not getting into fights, etc.

In conclusion, group homes aim to help teens with behavior problems fit into the society around them and improve self-esteem. These centers aren’t meant to be a means of punishment. Rather, they’re a means of positive reinforcement where teens can begin a new phase in their lives.

Fear of the Future During Adolescence
If you notice that your teen is anxious, they may be worried about their future. Read on to discover how to help teens overcome their fear of the future. Read more »
Link copied!
Interesting Articles
Teen behavior
Alcohol Consumption in Teenagers: What You Should Know