What's the Most Dangerous Position for Babies to Sleep in?

First-time parents often worry about the best position for their child to sleep in and in this article we'll be looking at the pros and cons of the three main sleeping positions. 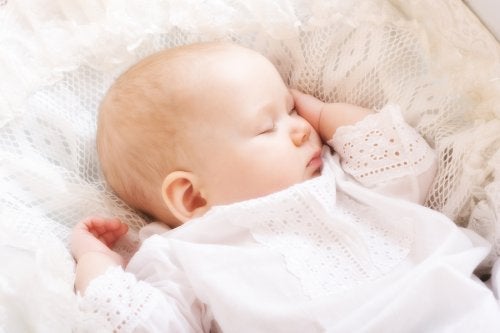 Babies need plenty of sleep to develop properly during their first months of life. Because of this, it’s essential to ensure that our children are able to sleep and rest as comfortably and safely as possible. Today we’ll tell you which is the most dangerous position for babies to sleep in.

Face down: the most dangerous position for babies to sleep in

The most dangerous position for babies to sleep in is face down. In fact, this position is thought to be one of the risk factors for sudden infant death syndrome (also known as crib death), one of the main causes of death in babies under six months of age.

With sudden infant death syndrome, the child is found dead suddenly, without showing any previous symptoms.

In most situations, the autopsy isn’t able to show the exact cause of death. That’s why pediatricians and researchers haven’t yet reached a consensus on the specific causes of sudden death in infants, but sleep posture could well be a contributing factor.

Undoubtedly, this is one of the most painful experiences that families can live through, and prevention is key.

How to prevent crib death in babies

According to the some Pediatric associations, the relationship between crib death and sleeping face down is indisputable. Experts even estimate that sudden death is up to 14 times more frequent in babies who sleep in this position.

However, we can’t point to sleeping on their stomachs as the sole cause of sudden death. Experts tend to consider many possible causes and the absence of symptoms often hinders their progress.

One of the most accepted hypotheses suggests that this syndrome is associated with changes in the nervous system. These would lead to difficulties in regulating cardiac functions and breathing.

So, as sleeping face down is the most dangerous position for babies, it’s essential to prevent this at all costs. Beyond this, experts recommend the following guidelines to prevent sudden death:

What’s the best position for babies to sleep in?

So, now that you know the most dangerous position for babies to sleep in, we’re going to look at the safest positions for the little ones to enjoy the best possible sleep.

Face up: the safest position for babies to sleep in

The safest sleeping position for breastfeeding babies is completely on their backs; this is called the supine decubitus position.

According to some pediatricians, all babies up to six months of age should sleep exclusively in this position. The exception will be cases when, by medical recommendation, they have to sleep in another position.

When babies sleep on their back, their respiratory tract (nose and mouth, basically) is free to inhale and exhale. In addition, in this position, infants can bring up the milk they’ve drunk instead of choking on it. In this way, the risk of suffocation due to choking or lack of air reduces significantly.

After six months, babies are usually able to instinctively turn over. Therefore, the risk of sudden death and asphyxia is much lower from then on. However, experts recommend that children sleep on their back for the first year of their life.

Sleeping on the side: intermediary risk position

The side-sleeping position also decreases the risk of sudden death by up to five times compared to sleeping face down. However, it’s not a stable position, and not as safe as sleeping face up.

Sleeping on his side doesn’t eliminate the risk that the infant can choke on the milk that he regurgitates while sleeping. In addition, there’s a risk that the baby will turn accidentally and end up on his stomach, and this, as we’ve said already, is the most dangerous position for babies to sleep in.

To sum up, it’s all a matter of getting our baby used to sleeping in the position that we consider most appropriate. Consulting the doctor about this will always be useful, and, of course, you should carefully monitor the baby’s movements at night.

Help Your Baby Sleep Through the Night: 7 Tricks
Helping your baby sleep through the night is a challenge for many parents, and it can be especially difficult during those first weeks at home. Read more »
Link copied!
Interesting Articles
The importance of sleep
How Rest Affects Academic Performance

The importance of sleep
Curiosities About Children's Sleep

Sleep is very important for children. Getting kids to rest and get enough sleep is important for physical and mental development. In…

Nowadays, sleep difficulties in children are a very common problem. Therefore, the use of melatonin in children to induce sleep…

The importance of sleep
Sleep Hygiene for Hyperactive Children

Do you want to know how you can help your hyperactive child to have refreshing, repairing, and good quality sleep?…

The importance of sleep
Sleeping Patterns in One-Year-Old Babies

Since birth, babies usually stick close by their mother. Commonly, they sleep in the same bed as their parents, or…