How Tobacco Smoke Affects the Fetus

Lots of people talk about the risks that tobacco smoke has on babies during pregnancy. In fact, it could lead to deformities and certain diseases. 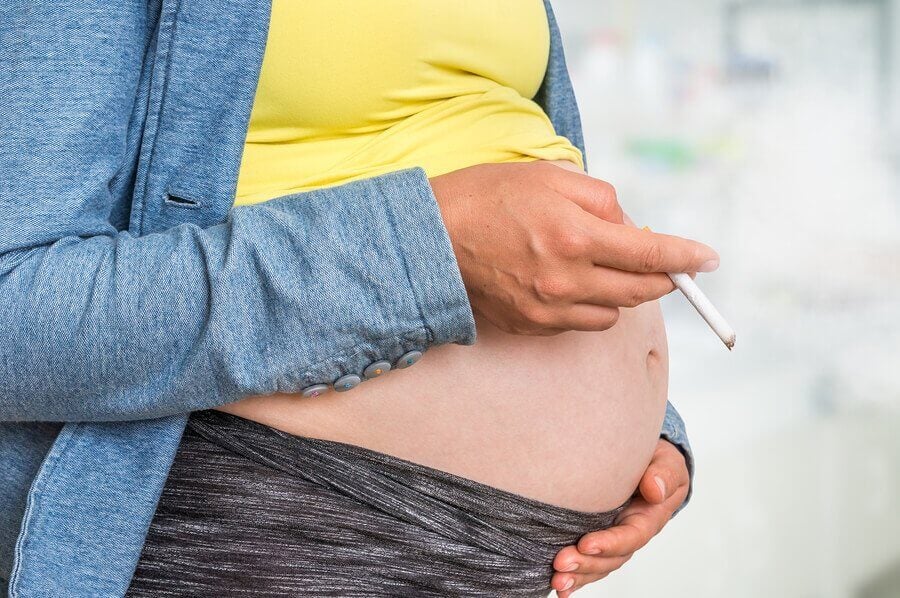 It’s important to know how tobacco smoke affects the fetus in order to prevent its damage during pregnancy. The risks of tobacco smoke include a greater chance of having congenital malformations.

Babies don’t get as much protection while in the womb. If pregnant women live with smokers, it can affect their own health and their baby’s. Also, many women can’t quit their smoking addiction during pregnancy.

There’s a myth that up to five cigarettes a day won’t cause real risk. In fact, this is a common mistake that even some OB/GYNs believe. This myth is based on the belief that the withdrawal symptoms are even worse than the carbon monoxide damage.

Babies are the must vulnerable up until the first month after they’re born when the chances increase for sudden death. On the other hand, many believe that tobacco smoke alters fetuses’ DNA, which cause disorders like infertility in childhood and adulthood.

How tobacco smoke affects the fetus

Specifically, cigarettes produce more than six thousand different toxins in women’s bodies. Despite this, there are many pregnant women who smoke, or who are around tobacco smoke every day. By doing this, both directly and indirectly, the main risk is that it decreases blood circulation around the placenta.

Low blood flow in the mother implies that the baby receives lower quality food, as well as less of it. This has an effect on the baby’s quality of life.

As a result, these children may be more vulnerable to certain diseases. For example, they’re at higher risk for otitis, bronchitis, severe respiratory infections and pneumonia.

Another way that tobacco smoke affects the featus is that it can lead to the development of congenital malformations, such as cleft palate or cleft lip, as well as heart disease. In addition, the child might suffer from attention deficit disorder (ADD) or attention deficit hyperactive disorder (ADHD).

If women smoke a lot, their children could show constant anger and irritation.

Additionally, tobacco smoke also affects babies that are breastfeeding. Smokers run the risk of producing less milk. In general, this stage, which is crucial for babies to grow, is a lot shorter than babies whose mothers don’t smoke.

In this sense, during breastfeeding, the smoke itself causes the most risk. Therefore, it’s important to wait at least 30 minutes before breastfeeding, wash your hands, and don’t smoke around your baby.

In summary, these are the main ways that tobacco smoke affects the fetus:

“Babies are the most vulnerable up until the first month after they’re born when the chances increase for sudden death.”

According to Stephanie London, an epidemiologist at the US National Institute of Environmental Health, tobacco smoke affects the DNA of babies with smoking mothers. The research method consisted in studying 6685 mothers and their babies. Among these mothers, 13% smoked during pregnancy.

In this study, they specifically looked at the umbilical cords. The results showed that the babies’ umbilical cords whose mothers smoked during pregnancy had mutated in more than six thousand positions compared to the children of nonsmokers.

To find out exactly how tobacco smoke affects the fetus, specialists found that the mutated genes corresponded to the development of their lungs and nervous system.

The changes in their DNA might also cause other genetic malformations, like cleft lip and cleft palate. In any case, genetic studies on tobacco smoke and pregnancy are still in progress.

In conclusion, fetuses shouldn’t be around any tobacco smoke. Quitting smoking should be pregnant mothers’ main goal, especially if they have a strong addiction.

There are a few tricks to quit smoking during pregnancy that aren’t very complicated. Your baby’s wellbeing depends on your determination to quit smoking, and for those around you to not smoke during this time.

5 Keys to Prevent Smoking Among Teens
Despite massive and repeated campaigns against tobacco, preventing smoking among teens continues to be one of the biggest challenge that we face today.  Read more »
Link copied!
Interesting Articles
I'm going to be a mom
15 Boys and Girls' Names Inspired by Astronomy