What Can I Do If My Child Won’t Accept Formula Milk?

Infants are first fed with breast milk, which provides all the nutrients needed at this stage of life. Formula products are available for cases where breastfeeding is impossible or needs to be complimented. 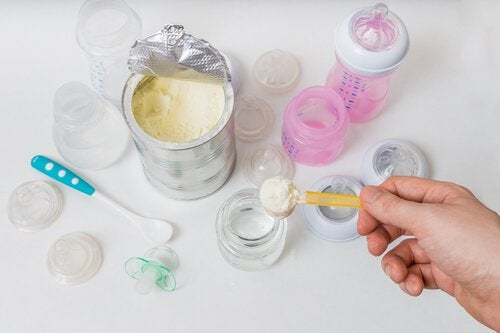 For the first six months of life, babies only consume milk. But although there are a lot of different options on the market, in some cases an infant won’t accept formula milk.

Together with new family configurations and scientific advances, in recent years breastfeeding has ceased to be synonymous with nursing. Formula milk is one alternative, and can also be used to compliment breast milk.

The decision about how to nurse a newborn isn’t an easy one. Often this decision will change according to the particular circumstances that a family goes through during the baby’s development.

The best case scenario is for the mother to be able to combine different methods of nursing for her baby.

One substance for every baby

This phrase accurately reflects the explanations offered by doctors when they recommend breastfeeding over other methods of feeding. According to the American Medical Association and the World Health Organization, breast milk is the best option for infant nutrition.


However, there are circumstances in which breastfeeding isn’t an option. Some of these circumstances may be: an inability to breastfeed, a lactose intolerant infant, or simply because the mother has stopped lactating.

What can be done in situations where the baby won’t accept formula milk?

Is it normal for babies not to accept formula milk?

It can often be the case that a baby who was previously breastfed won’t accept formula milk. For many kids, the change from breast to bottle can be difficult.

A period of adaptation might be required for the child to get used to sucking on the new teat; this will involve getting familiar with the new way of feeding and at the same time giving up on the idea of suckling exclusively at the mother’s breast.

As well as the biological impossibility of breastfeeding for a long time, stopping is a necessary step on the path of psychological development.

An important characteristic of formula milk, and one of the reasons why experts recommend incorporating it into a baby’s diet, is that it contains vitamin D.

Numerous attempts to start the baby on formula milk

According to the Spanish Paediatric Association, it’s normal for children to change their routines and tastes throughout infancy. For this reason adults shouldn’t worry excessively if a child still won’t accept formula milk after a few tries.

A baby who isn’t lactose intolerant will often take to formula milk after a number of efforts.

The association also recommends that these parents replace milk with other foods that contain the same nutrients.

Organic cow milk isn’t an option until after the first year; younger infants’ digestive systems aren’t able to digest this milk, which is more complex than formula or breast milk.

Along the same lines, many vegan organizations — on the rise in many Western countries — are also in favor of milk substitutes. They point out that humans are the only mammals that continue to consume milk after weaning, and that drinking milk from other species such as cows is unnecessary and unhealthy.

These organizations are also against breastfeeding for too long. Instead of this, they propose beginning to incorporate solids into a baby’s diet from 6 months.

There are a lot of arguments for feeding with solids; among them is that these foods can provide all the nutrients necessary for babies’ development, and as such reduce their demand for milk. In addition, it ensures a calm, easy weaning period for both mother and child.

Link copied!
Interesting Articles
Babies
How to Respectfully Wean Your Baby at Night

What do you need to know?
CPR in Babies and Infants: What You Should Know