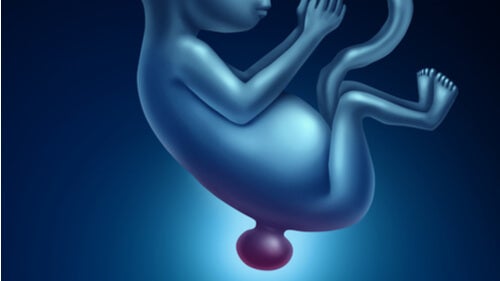 Spina bifida is a congenital malformation that affects the baby’s spine. It develops during pregnancy, when the spinal column formation doesn’t properly close around the spinal cord and nerves, leaving an opening that exposes them.

Being a malformation of the spine, spina bifida can cause both physical and intellectual disabilities. Symptoms vary, as there are several types of spina bifida. They will mainly depend on:

Meningocele affects the meninges, the membranes that cover and protect the brain and spinal cord. When they protrude through the opening formed in the spine, a sac filled with fluid (meningocele) is created.

Babies with this condition can suffer from various health problems, depending on the damage to the nerves surrounding the spine.

For example, they may have muscle paralysis to varying degrees or learning disabilities, such as attention deficit hyperactivity disorder (ADHD).

When we talk about spina bifida, we’re usually referring to myelomeningocele. It’s the most serious variety of this malformation and causes disabilities ranging from moderate to severe, including possible loss of movement or sensitivity in the legs.

It occurs when the meninges and the lower end of the spinal cord protrude through the orifice of the spine and form a sac filled with fluid. This sac, which is external, can burst during delivery, exposing the spinal cord and nerves.

In addition to bone or muscle problems, it’s also common for babies with this malformation to have hydrocephalus, an accumulation of fluid in or around the brain.

This is the mildest form of spina bifida and may go unnoticed. As the name suggests, in this variety of the syndrome, the malformation is “hidden” under the skin.

Even if it’s hidden, there may be birthmarks or a dimple on the skin around the opening. Inside, the medulla may be attached to the tissue rather than free, so that the nerves aren’t affected.

Most babies with occulta spina bifida have no long-term problems. Moreover, it’s often detected later in childhood or even as an adult.

The causes of spina bifida are unknown. It’s necessary to investigate the factors that intervene in the development of this malformation, such as genetics or the environment.

However, it’s known for sure that it’s related to low levels of folic acid.

Spina bifida appears in the first weeks of pregnancy. It’s often formed before the expectant mother even knows she’s pregnant.

Taking folic acid during pregnancy (400 micrograms daily) helps reduce the risk of its appearance. However, this doesn’t guarantee a healthy pregnancy.

Other tips that can be followed to prevent this malformation include:

The treatment of spina bifida varies according to its severity. Depending on which systems it affects, children will need the support of different specialists in the long term.

This includes not only doctors, but also therapists, social workers and associations that provide support and understanding.

In babies with spina bifida occulta, no treatment may be necessary. If the spinal cord is anchored, surgery will be necessary to separate it from the tissue.

After the operation, babies usually don’t present problems, although it’s possible that it will become anchored again.

With the treatment indicated, most people with spina bifida can grow and have full and productive lives.

Babies with meningocele need to be operated on in the first months of life. The surgery places the meninges in the body and closes the orifice.

The process is similar with myelomeningocele: the baby must be operated on, but it occurs between the first and second day after birth.

If it’s detected in the early stages of pregnancy, an operation can occur in week 25 to correct the malformation.

It will also be necessary to operate on hydrocephalus if the baby suffers from this.