What to Do if Your Baby Scratches Himself

Mothers tend to become concerned when their newborn baby scratches himself, as the wounds can become infected. What can you do about it? Read on to find out. 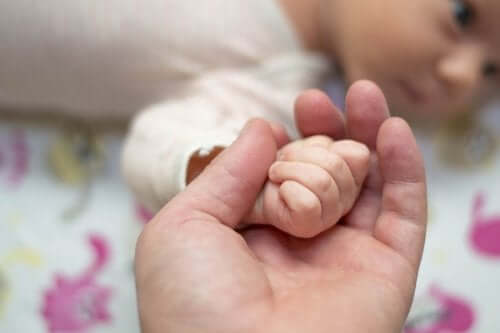 One of the most common questions moms ask pediatricians are related to scratches, especially on the face. In this article, we’ll tell you what to do if your baby scratches himself.

Is it normal for my baby to scratch himself?

Don’t worry, there’s nothing wrong about this behavior. Babies, especially newborns, have overly thin and sharp nails, which is why it’s normal for them to scratch themselves while they’re sleeping.

Also, babies’ skin is very sensitive and delicate, which is why it’s common for this to happen.

One of the many concerns new mothers have are the after-effects or consequences of such scratches. More precisely, they want to know if they’ll scar.

Although they may seem deep and take time to heal, rest assured that these scratches are superficial and won’t be noticeable once they heal.

What to do if your baby scratches himself

Although there’s no cause for concern, you’ll definitely want to keep your baby from scratching his face while he’s sleeping. Some parents choose to put cotton gloves or mittens on their baby. Another option is to buy long-sleeved clothes.

However, the downside of these alternatives is that, first of all, it’s uncomfortable for babies. Second of all, they only work for the winter. If it’s hot, in addition to bothering them, it can make them sweat and even lead to fungi from lack of air.

Moreover, another alternative for children under two months old is wrapping them up with a blanket when they’re sleeping. However, it isn’t very comfortable either and can even be dangerous to their health.

Think about it: you wouldn’t want to feel tied down or have gloves on when you want to move freely. Therefore, don’t do the same thing to your baby at least at certain times when their hands are vital, such as while they’re in contact with your breasts when you’re breastfeeding them.

Some mothers choose to cut their baby’s nails so they don’t scratch themselves. It’s very important to ask for a pediatrician’s advice if you do decide to do this. Remember that cutting their nails wrong can leave them sharper and even cause an infection or a wound.

Some stores sell special scissors to cut babies’ nails with rounded edges. Nevertheless, you have to know the right way to cut them. If you’re scared of cutting your baby’s nails, you can always use a nail file to prevent sharp edges that cause scratches.

“Babies, especially newborns, have overly thin and sharp nails, which is why it’s normal for them to scratch themselves while they’re sleeping.”

How to treat scratch-related wounds

If your baby scratches himself even though you cut or file his nails, you first have to wash his hands and face thoroughly with mild unscented soap.

This way, you reduce the risk of the scratches becoming infected due to a microorganism that’s housed in the nails. Also, you’ll moisturize your baby’s skin so that the scratches heal faster.

However, no matter how much you care for and protect your baby, he’ll still scratch himself in one way or another. If the scratch becomes infected for some reason, you must act as soon as possible.

Here are some tips for these cases:

1. Wash the wound with water and mild soap

Newborn babies’ skin is very delicate. Thus, fragrances can be harmful to their health. To wash and disinfect a wound, it’s always better to use mild soap and warm water.

Sometimes, scratches are so deep that they cause bleeding. If this happens, don’t get nervous or worry. Just clean the area and use some gauze to stop the bleeding. You should also know that some areas of the face are more prone to bleeding.

If your pediatrician deems it necessary and the scratch is deeper, you can put a bandage on the wound. The bandage should be hypoallergenic and you shouldn’t leave it on for too many hours, as it’s better for the wound to “breathe” and heal itself. Finally, there’s no need for you to apply creams or ointments on the scratches.

5 Must-Have Items for Your Premature Baby
The best thing to do when your premature baby arrives is to equip yourself with the items your family needs to overcome the demands of this situation. Read more »
Link copied!
Interesting Articles
Breastfeeding and baby formula
What Should Moms Eat While Breastfeeding?