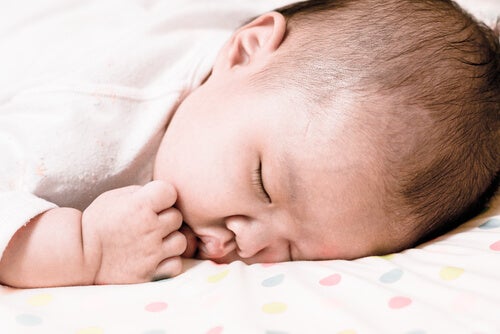 Many parents, especially those who are first timers wonder what to do when their baby turns on their stomach while sleeping. Is it a dangerous position that can put their health at risk?

You leave the baby in the crib for five minutes and they turn on their stomach while sleeping. If this happens to your baby frequently, you should watch them closely while they sleep.

Vomit is enough to generate asphyxia which can then complicate the child’s respiratory capacity. Children from the age of one month to 4 months are the most vulnerable.

However, the question about how our children sleep is more complex than it may seem. Fortunately, parents can take preventative measures in order to ensure the little one’s safety.

What is sudden infant death syndrome?

SIDS refers to the unexpected death of a child under the age of one, even when they were completely healthy. It’s also known as “cradle death” and it’s still an unsolved mystery for the scientific community.

Most cases of SIDS don’t have an explainable cause even after an autopsy is performed. Even though they’re only theories, some scientists believe there are certain elements that can trigger SIDS.

The most complex theory states that SIDs may occur due to an anomaly in the infant’s “micro-awakening” system. However, some specialists believe that it has to do with asphyxia caused by external elements such as sleeping face down.

Children under the age of four months should be monitored throughout the night in order to avoid these unwanted episodes. It isn’t right for parents to leave the child unattended to all night just because the baby doesn’t cry.

The most vulnerable population for SIDS are infants who are under the age of four months. However, it’s recommended for parents to watch their child’s sleeping position until they reach the age of 12 months.

Checks can be done during the night in order to make sure that everything is okay.

Co-sleeping and other sleeping habits

People who support co-sleeping claim that active surveillance is one of the advantages of this family practice. As we previously stated, night checks are the best strategy for parents to avoid SIDS.

If the baby turns on their stomach while sleeping, the correct thing may be to change the baby’s position every once in a while. This way you’ll avoid the baby adopting dangerous and uncomfortable positions.

When a child sleeps face-down, you have to change their position. Creating the habit of sleeping face up is the safest alternative for your child.

Some parents prefer putting their baby face down. They believe that this position allows their baby to sleep better, however, it isn’t recommended during the first months of life.

Another great option is to place the baby with their face to the side. While employing this position, it’s best to change the baby’s posture every once in a while to prevent neck pain. The fetal position is one of the most recommended positions for sleeping.

It’s also important to monitor the formation of the baby’s head during the first three months. If they’re placed to sleep face up for long periods of time, the risk of plagiocephaly is increased.

After the first year, children are in better control of their movements while they sleep. They will look for positions that suit them the most while they’re sleeping.

It never hurts to make sure the child is okay while they’re sleeping. A little bit of movement or sounds are enough to know that everything is okay.

These measures are very important to keeping our newborns safe during the first few months after birth.