The Stages of Development in a Baby's First Year

How do babies evolve during their first 12 months of life? What milestones do they reach each month? In today's article, we'll take a close look at the stages of a baby's first year. 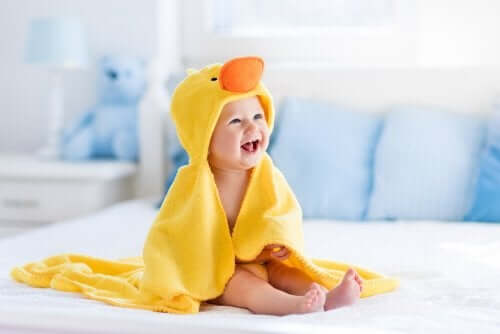 A baby’s first year consists of an amazing evolution. From newborns who spend most the time sleeping, these tiny humans go on to make tremendous psychomotor advances.

During these first 12 months, babies learn to establish relationships with their environment. They start to learn how to control their bodies, their movements… And they start to communicate using babbles and gurgles and even their first words.

Do you want to know more about the development that takes place during a baby’s first year of life?

Stages of development during a baby’s first year

Below, we’ll look at the different abilities that babies develop during their first year of life. But first, we want to remind you not to worry if your baby’s own development doesn’t coincide with the descriptions below. Remember that every baby develops and evolves at their own pace.

The stages we describe below are generalizations, as children reach developmental milestones in their own time. So, if your little one has yet to develop a certain skill, just be patient.

First developmental stage in a baby’s first year of life

Second developmental stage of a baby’s first year of life

Third developmental stage in a baby’s first year of life

The seventh month of life

Fourth developmental stage in a baby’s first year of life

The eleventh month of life

Conclusions regarding a baby’s first year

These are the stages of development that take place during a baby’s first year. But that doesn’t mean that all children reach each milestone at the same time. Some things may occur a month earlier or a month later than indicated above, and that’s perfectly normal.

Proper Nutrition during the First Year of A Baby’s Life
In order for a child to grow up in a healthy way, proper nutrition is needed, especially during their first year of life. Read more »