Cryptorchidism affects a large number of little boys and many parents are unaware of this type of disorder. Therefore, we recommend constantly evaluating whether the testes descend on their own. 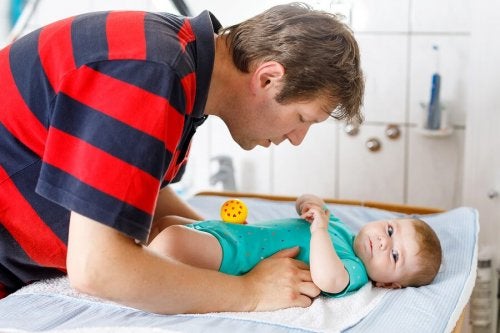 Cryptorchidism is a genital problem related to an undescended or poorly descended testicle. If it it isn’t treated in time, it can do enormous harm to the child in the future.

This genital development disorder doesn’t show up on a prenatal ultrasound before the 28th week of gestation. Therefore, to detect it early, a transinguinal migration must be performed.

What causes cryptorchidism to appear?

Cryptorchidism is one of the most common disorders in baby boys. The factors affecting its appearance are varied because there is no exact cause.

These are some of the most frequent elements that indicate a child could be suffering from this disorder:

The most common way to diagnose this disorder is through a doctor’s examination. The doctor will palpate the scrotal sac.

If the sac is empty, the index finger is run along the inguinal canal in the caudal direction, making a movement from top to bottom, to confirm if the testicle is in this path.

If the testes haven’t descended correctly or are ectopic, the probability of detecting it is 80%.

This evaluation should be performed routinely and, although it’s very effective, false cryptorchidism may occur due to a cremasteric reflex. Occasionally, doctors may perform an abdominal ultrasound, tomography or resonance to locate the testicle.

“The testicles begin to form from the sixth week of gestation in the abdominal area.”

Several types of cryptorchidism exist. The pediatrician, according to his or her evaluation, will be the one in charge of determining the treatment to follow depending on the results.

These are the types of cryptorchidism that exist:

Most cases of cryptorchidism resolve spontaneously in the first year, so doctors recommend only observing the child and periodically checking to see if the testicles descend on their own.

If this doesn’t happen after one year of age, treatment should be considered. It can be hormonal or surgical.

Currently, this treatment is less common. It consists of intramuscular administration of a hormone that promotes the descent of the testicle into the scrotum.

As a negative point, the results of this treatment aren’t always effective. The testicle will most likely rise again after the treatment. In addition, this type of treatment isn’t without side effects.

Surgery represents the most effective treatment available today. It consists of descending the testicle into the scrotum by means of an intervention called orchidopexy.

It’s recommended that it be performed before 18 months of age. The chance of success for this intervention is quite high.

Without timely treatment, this disorder can greatly affect the child’s health. Therefore, act quickly if you suspect your child has this anomaly in his genital area. Some of the complications that can occur include:

Cryptorchidism can cause harm to children if not treated in time, so parents should pay special attention if they suspect that their child suffers from this disorder. Communicate quickly with the family doctor, and perform all the relevant check-ups.