Development of the Parachute Reflex 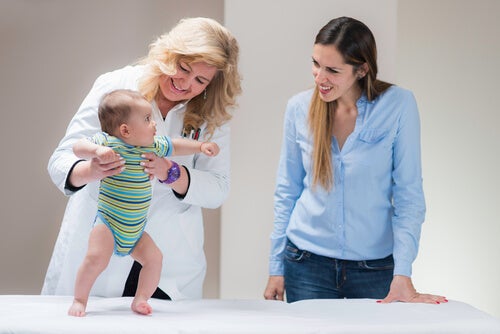 In this article we’ll explain the development of the parachute reflex in babies.

Reflexes in babies are a motor response to certain stimuli. Reflexes are the main feature of a developing nervous system.

These responses in babies usually appear during the first months of life and disappear when the brain is mature.

The most common reflexes are the suckling reflex, the stepping reflex, and the not-so-well-known but equally important parachute reflex.

What is the parachute reflex?

The parachute reflex is a protective response that appears around 5 months of age.

This reflex can be seen when the baby is held under the armpits in a straight position and turned quickly onto his belly, as if thrown on a surface.

The motor response consists of extending the arms to break the fall. This reflex is maintained throughout life.

Why do babies have the parachute reflex?

The parachute reflex is one of our primitive reflexes. These are operated by the central nervous system and favor survival during the first year of life.

The primitive reflexes begin in the womb and develop with the movements typical of each age. Therefore, these reflexes are produced by the action of stimuli from the outside world.

They are involuntary movements that disappear over time.

How to determine if your baby has developed the parachute reflex

The best way to examine the development of your baby’s reflexes is to consult with your pediatrician each month.

However, you can check the baby’s parachute reflex by seeing whether he has the following reactions:

Regularly checking the presence of these reflexes in your child will give you an idea about how his motor skills and nervous system are developing.

The best way to examine the development of your baby’s reflexes is to consult with your pediatrician each month.

Absence of reflexes in babies

The absence of multiple reflexes in babies can occur as a result of neurological injury or a weakness in the motor system.

These pathologies are presented with the following characteristics:

Timely detection of these conditions may suggest the inclusion of therapies that encourage the development of these reflexes, or the skills appropriate to the child’s age.

An excellent alternative may be the implementation of games and movements that simulate involuntary body responses automatically.

In summary, the presence of reflexes in a baby guarantees correct nervous and motor development.

Being aware of whether they appear and disappear at the correct time should greatly contribute to the health of the child.