It's normal for babies to spit up a bit of liquid from time to time. The problem arises when the situation is accompanied by other symptoms, or occurs too frequently. In this article, we'll take a look at Gastroesophageal Reflux Disease in babies. 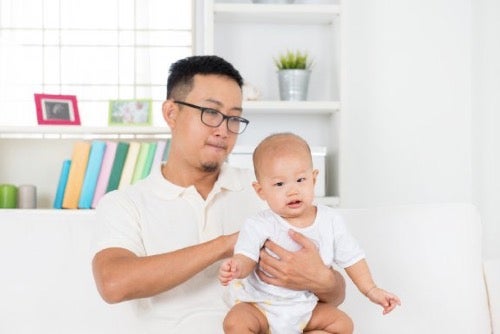 All babies spit up liquid from time to time, sometimes even vomiting. However, when this situation occurs consistently and frequently, it could be something else. These cases can often be attributed to gastroesophageal reflux disease, or GERD.

Gastroesophageal reflux disease is a possibility when the reflux occurs consistently and lasts from 12 to 14 months. This isn’t cause for serious concern, but we do need to consider some effective remedies.

In this article we’ll take a detailed look at GERD.

The esophagus is the conduit that allows the passage of food from the mouth to the stomach. It contains a a muscle known as the lower esophageal sphincter (LES). Like a valve, it facilitates the transit of meals.

When functioning normally, the LES relaxes, allowing for the fluid passage of food. However, in some babies this muscle may not be fully developed, which affects the esophagus. The result: the baby regurgitates milk, be it breastmilk or formula.

Basically, GERD occurs due to a lack of control of the esophageal sphincter. In affected children, the sphincter relaxes and distends erratically. The situation is resolved once this small muscle has completed its development.

Vomiting and reflux are the most common symptoms of this temporary medical condition. However, there are also other signs that a baby will display if affected.

One specific symptom is the arching of the back while eating. Babies with this condition tend to tilt their heads back when fed. They may also experience problems swallowing.

Other symptoms include coughing, chronic colic, and minor breathing complications. In addition, affected children tend to reject food, which can result in a certain amount of weight loss.

There are several medical tests to diagnose gastroesophageal reflux disease in babies. Of course, the only way to confirm this condition is by consulting a pediatrician. These are the three exams:

“Babies with this condition tend to tilt their heads back when fed. They may also experience problems swallowing.”

The most effective treatment

GERD in babies requires that parents take greater care in the way they feed their child. The first step is to help the child burp more frequently. This should occur not only after the feeding, but during as well.

After meals, you should place the baby in a vertical position. It will be necessary to maintain this position for half an hour after each feeding.

Some doctors recommend using products like rice cereals. The idea is to mix them with the milk in the baby’s bottle. There are also specialists who suggest changing the formula of this food.

Also, there are some medications the pediatrician may prescribe if necessary. Examples include H2 blockers and proton pump inhibitors. Both treatments help to decrease the amount of acid in the stomach.

Only 10 percent of babies develop problems due to an underdeveloped LES. In most cases, the condition can be overcome without major complications. Only a very small margin of affected children need to undergo surgery.

Parents should be alert to all signs of this condition, and call on a trusted pediatrician when needed. This professional is the only one who can diagnose the condition with certainty. Once it’s been diagnosed, all that’s left is to be more careful when feeding babies with GERD.