How iPads and Smart Phones Affect Children Under 2 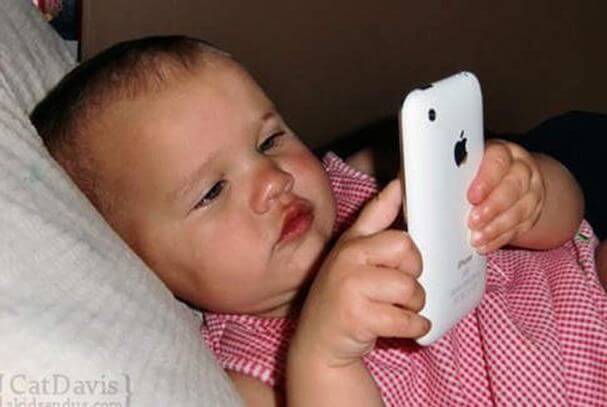 The use of electronic devices by children has been highly debated from various viewpoints. In this article we’ll discuss specifically how iPads and smart phones affect children under age 2 in terms of health and social interaction.

Those who warn us about the possible health risks often support their argument based on signs of major conditions such as tumors and cancer. However, it is also a valid point to say that to date no conclusive results have been found in research to indicate that this is the case.

In any case, you can never be too cautious, especially if we consider the following to be verifiable arguments.

It has been said that unlimited use of electronic devices, including smart phones and iPads, contributes to physical inactivity which is one of the main causes of obesity in the world, whose rates have undeniably been increasing, especially among the children and youth population.

From a social perspective, criticisms have been directed towards a lack of socialization which is encouraged by the excessive use of these devices, because often some children prefer to “interact” with phones instead of other children.

Regardless of whether we consider the research that discourages the use of these devices to be valid or not, we have to think that babies under 2 years old (as well as older children) need to explore their environment in order to develop: crawling, walking, climbing, jumping, rolling, dancing, running… all this is not accomplished with a tablet while they sit in an armchair.

Why do children need to move?

Children’s brain development (neurodevelopment) is a process that begins in the womb but that continues until 4 or 5 years after birth. This is to say that during this period, their brain structures are still being formed, such as synapses (connections between neurons).

From experience and out of necessity, the body responds to the demands of its environment. So how can watching videos on mom’s cell phone help neurodevelopment?

Children need to get to know their body and learn how to control it from experience, even if this messes up the house and makes noise.

Babies need to experiment with their senses.

Neurodevelopment also implies that the nervous system knows how to process information through the use of their five senses and can use it to learn. It is also important that they’re able to comprehend vestibular stimuli (balance and movement) and proprioception (sensations coming from the body).

All of this is accomplished by playing, discovering new textures and temperatures, playing musical instruments, going to the park, swinging, singing, and getting dirty… not by playing the latest popular game on the iPad.

Babies learn to communicate by associating with people, not machines; they learn through listening to their mom, playing with siblings and cousins, attending kindergarten, solving problems, singing, and listening to stories.

Communication allows them to develop social skills, so that children grow up being able to respect the opinions of others, to wait their turn to play, to know when to listen, when to make eye contact, when it is their turn to talk, and when other people talk.

None of this is learned with Mom’s phone.

Basic skills are concepts that are learned through experience, such as spatial concepts, (up, down, near, far, front, back, inside, outside) as well as temporal concepts (before, after, first, second, fast, slow, during).

Other concepts such as weight, similarity and distance are also included. There are certainly games for electronic devices that address these concepts, however they do not allow child to learn what is “up”, or which toy is heavier than another, for example.

Electronic games can only represent what the user already knows through experience in order to be able to select the correct answer.

It’s not as bad as you think

Smart phones and iPads will not cause any irreversible damage to your baby as long as they aren’t a substitute for real life experience. That is to say, do not spend time showing them games on these devices; but instead invest that time and effort into playing with them outdoors if possible, or with their toys.

This is how you can develop your child’s intelligence, although sometimes social pressure makes us think otherwise.

A child who runs, laughs, falls, makes messes, dances, and fights with siblings is a sign of a child developing healthily.

Maybe use the iPad or smart phone when the situation doesn’t really allow you to have toys handy. Choose “Educational Games” without deceiving yourself into thinking that they are actually learning something.

Really by playing these they are just practicing something that they have already learned and the only thing the device is doing is keeping them quiet.