Have you ever had an ingrown nail? If it's painful for adults, imagine its consequences in children. Find out what kind of care is needed to prevent them. 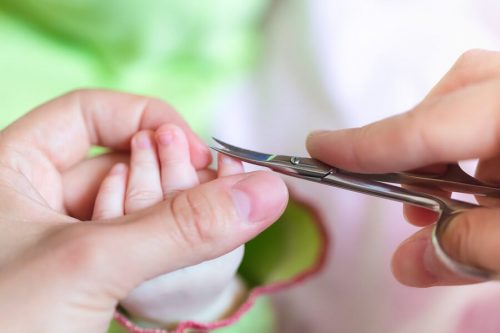 One of the tasks that awakens much uncertainty in parents, especially first-timers, is to cut their baby’s nails. However, this is a need that can’t often be postponed. Ingrown nails in babies cause issues that can be both annoying and painful.

In their first days of life, babies’ nails are usually very soft and delicate. This is due to the liquid nature of the environment in which they spent so much time – the mother’s womb.

However, as time goes by, they harden. Thus, the time comes when we have to face the difficult task of cutting them.

Perhaps for many parents, this is a minor detail, but there are others, often less experienced, who have many doubts about different issues regarding their babies’ nails. Up next, we’ll address different aspects of this topic.

When to cut babies’ nails for the first time

To avoid ingrown nails in babies, we must focus on their maintenance. Although, a very common doubt has to do with the right time to cut them for the first time.

The general recommendation suggests doing it three or four weeks after birth. The best thing in these cases is to avoid scissors since any movement can result in a wound on their delicate skin.

As for the frequency of subsequent cuts, each baby’s nail growth should be evaluated. This aspect can vary from one to another, they tend to be long again in a very short time.

How to avoid ingrown nails in babies

Children have the same capacity, or even more so, to suffer ingrown nails as adults. This is due to their nails’ lack of rigidity; they can bend with extreme ease and grow towards the cuticle. This is how an ingrown nail occurs, which in turn generates inflammation and possible infection.

To detect ingrown nails in babies, you must pay attention to the following points:

What to do with ingrown nails in babies

There are people who are more prone than others to suffer ingrown nails. Of course, this also happens with some babies.

If you encounter this problem, you can follow these steps so that the pain doesn’t continue to afflict your baby:

In some cases, it may be necessary to use ointments or special products in the water we use for soaking. The purpose of this is for the pain to stop before proceeding to remove and cut the ingrown nail. A pediatrician must prescribe both options of course.

As in many other issues related to health, prevention is a fundamental aspect of ingrown nails in babies. Like we pointed out before, the best way to avoid this condition and its possible complications is to cut the nails regularly and make sure that the tips aren’t inserted into the cuticles.

In regards to form, it’s ideal to cut them in a straight line. Another very useful recommendation is filing or placing mittens in the first days after birth. With their uncoordinated movements, newborns can scratch their faces very often.

In conclusion, ingrown nails in babies are something that parents should be aware of. They occur often in the feet, due to the use of footwear, and can generate a lot of discomfort and pain. If you have doubts or see signs of inflammation, consult your doctor.