What Is The Landau Reflex And How Is It Evaluated? 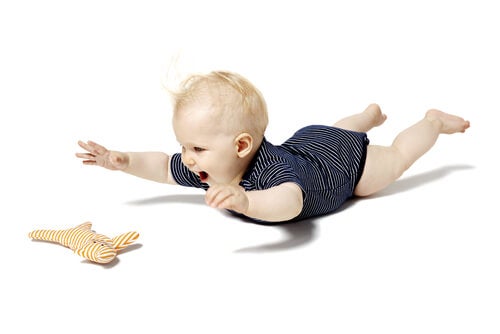 The Landau reflex is one of many reflexes that can be seen in the first months of a baby’s life. These reflexes show that the nervous system is functioning efficiently.

Let’s review what the Landau reflex is, its characteristics and what other reflexes can be seen in the first months.

Like any other reflex, the Landau reflex is an involuntary response to a stimulus.

Reflexes are instinctive acts of our bodies. We carry them in our DNA, since their main function is to allow us to adapt to the surrounding environment that we interact with.

To evaluate the Landau reflex, the baby is placed in a ventral position (face down) on your arm, forming a right angle with your forearm. The baby should straighten his torso and lift his limbs and head.

Generally, these movements are accompanied by the bending of the knees and elbows. What the baby tries to do with these actions is counteract the effect of gravity, while looking forward to find a visual reference point.

Characteristics of the Landau reflex

What does absence of a reflex mean?

The absence of this response may suggest motor weakness on the part of the baby, and it will be necessary to exercise his motor development in a corresponding way.

Or, it could signal a delay in mental maturation. The best thing in these cases is to follow your pediatrician’s suggestions.

Doctors examine the presence of these reflexes very early in babies’ lives. This evaluation isn’t only quantitative, but also qualitative.

In other words, not only is the presence of the reflex noted, but also its execution, even if it’s totally involuntary.

If the expected reflex doesn’t appear, it could indicate some kind of deficiency. If the movement is weak, it can be a symptom of muscle weakness.

If it’s extreme, it could be the result of a withdrawal syndrome. If it’s asymmetrical, it could be a sign of a clavicular lesion, among other various possibilities.

The Landau reflex isn’t the only reflex characteristic of a baby’s first months of life. Among the main ones, we can name: