Learn All About Newborn Jaundice 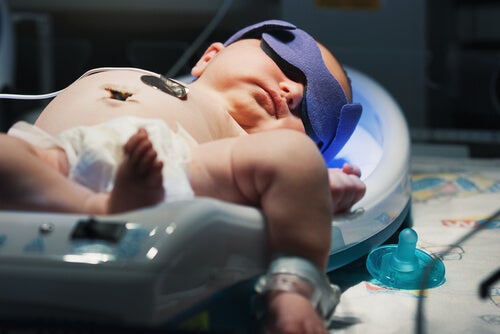 Newborn jaundice is a disease that is unknown to some parents; however, this doesn’t mean it doesn’t affect many babies.

Newborn jaundice is a condition that affects newborns in the first days or weeks of life. It is characterized by the yellowish color of the baby’s skin, which usually begins on the face and, in the most critical cases, reaches the feet.

Bilirubin is a yellow substance resulting from the breakdown of old red blood cells. As it occurs, it is further broken down by the liver and leaves the body through feces.

A newborn comes into the world with a certain level of bilirubin in his blood, but if his liver removes it, it isn’t a problem for him.

While in the womb and protected inside the bag of amniotic fluid, the placenta is responsible for removing the pigment from the baby‘s body and taking it to the mother’s liver for processing.

At birth, the newborn’s liver should begin doing that job. But when it fails to do so efficiently, the bilirubin accumulates in the body.

The skin and outer layer of the eyeball (sclera) turn yellow, and the child becomes jaundiced.

Newborn jaundice can also occur when the newborn has a disorder that favors an increase in the number of “old” red blood cells to be replaced. Some of the most common are:

Newborn jaundice is common after birth. Almost all infants have it during the first days of their life.

This is a temporary and harmless condition that usually disappears on its own, because the baby’s liver “learns” to process the bilirubin to be eliminated in his stool.

There is another type of jaundice called “breast milk jaundice” which occurs during the first days and weeks of life.

In these cases, the condition occurs when a substance found in breast milk interferes with the ability of the baby’s body to process and eliminate the pigment known as bilirubin.

This type of jaundice, like the previous one, is not serious for the baby and usually disappears after a few days.

Premature babies are more prone to jaundice than full-term babies.

Although newborn jaundice is a condition diagnosed with some ease and can disappear on its own, when warranted it receives immediate treatment and can sometimes get worse.

This happens due to:

The treatment for newborn jaundice focuses on phototherapy. The child is exposed to ultraviolet light in the incubator with his eyes covered.

When the jaundice is severe, the baby looks tired and doesn’t eat well. This hinders his interaction with the environment as well as his weight gain.

Although they happen very rarely, there are complications with newborn jaundice that can reach the brain. Among them include:

His diet, abundant and frequent, allows him to have several bowel movements each day, eliminating the yellow substance through his feces.

Observe the yellow coloring on your child’s skin and go to the pediatrician if you suspect he’s sick with jaundice.

But first of all, give him enough breast milk so he has the opportunity to overcome the disease on his own.