How Do I Remove Rheum From My Baby's Eyes?

For various reasons, your baby may develop rheum at some point during the day. It's highly recommended that you remove it in the proper way. 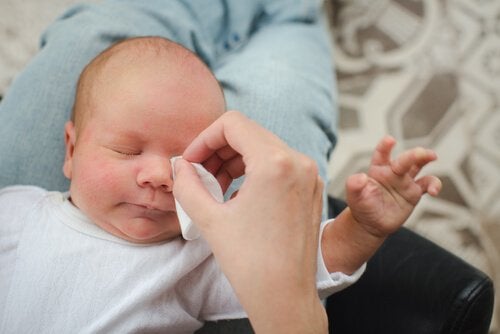 It’s important that you know the correct way to remove rheum from your baby’s eyes. This will prevent major complications and maintain your baby’s hygiene.

It’s normal for babies to have rheum when they wake up, since keeping their eyes closed for a long time will cause secretion to accumulate in the lacrimal gland.

However, there are other reasons why babies may develop rheum.

Rheum is a thin secretion that occurs in the eyelid and lacrimal gland. Occasionally there can be more than usual and this can prevent babies from opening their eyes normally. It’s usually yellowish or whitish in color.

Rheum can occur for many reasons. These are some of the most common:

Ways to remove rheum from your baby’s eyes

You should learn the best way to remove rheum from your baby’s eyes in order to maintain his or her hygiene, and avoid infections. Here are some tips:

Rheum caused by obstruction of the lacrimal gland

Lacrimal gland obstruction is a very common condition in newborns. This anomaly is known as stenosis of the nasolacrimal duct.

Because of the obstruction, tears don’t flow properly, which causes a yellowish, whitish or greenish secretion, and leads to abundant rheum.

This condition occurs because the fold of the mucosa isn’t partially or completely perforated. To remove rheum from your baby’s eyes which has been caused by this condition, you need to carefully follow the above recommendations.

You can also gently massage the inner corner of the eye and the base of the nose. By doing so, you stimulate the Hasner valve – a fold of the mucosa that isn’t perforated – and facilitate tear drainage.

This condition is temporary and may only be an issue during the baby’s first year. If abundant secretion persists, you should see a specialist.

Conjunctivitis is an inflammation of the conjunctiva, a transparent membrane that covers the inside of the eyelids, causing abundant secretions of rheum in the child.

If your baby has eyes which are glued shut, redness accompanied by abundant secretion and swelling, he or she may have conjunctivitis.

There are several factors that cause conjunctivitis in babies. For example:

Finally, avoid exposing your baby to these agents. In addition, follow the previous suggestions to remove rheum from your baby’s eyes correctly, without harming them and maintaining their hygiene.