The Stages of Cognitive Development According to Piaget 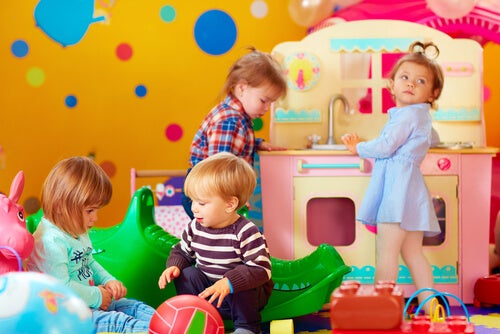 What are the stages of cognitive development according to Piaget? In the following article, we’ll describe the stages defined by Piaget regarding human learning.

The term “cognitive” refers to everything related to knowledge. At the same time, knowledge refers to the amount of information one possesses as a result of learning or acquired experience.

Piaget’s concept of the stages of child cognitive development

Piaget believed that it’s important to allow children to explore on their own in order to learn. This exploration influences their cognitive development.

This Swiss psychologist also believed that children of any age are able to solve diverse situations and problems. Piaget evaluated common mistakes made by children of different ages.

His observations led him to the conclusion that children within the same age group commit the same mistakes. In turn, Piaget also concluded that cognitive development occurs in an evolving sequence.

Piaget referred to this sequence as the stages of cognitive development. He claimed that the stages in this process follow a strict order in all children from any country. However, the exact age that a child passes through each stage may vary slightly from one child to the next.

Piaget’s theory divides cognitive development into 4 stages. Below, we’ll look at each one in detail:

Stage one: The sensorimotor stage

The first stage of cognitive development is the sensorimotor stage, which lasts from birth until age 2. Here, children learn to experiment and discover the objects around them.

They do so with the help of their 5 senses and their motor abilities. This experimentation allows them to learn a concept that is referred to as object permanence.

Prior to learning this concept, children don’t understand that objects continue to exist even when they can’t see them. That’s why it’s so fun to play peek-a-boo with them, covering your face and then magically reappearing.

Piaget’s conclusions regarding the sensorimotor stage

The child is beginning to learn about the world around him, and this knowledge will serve as a foundation for the second stage.

The preoperational stage begins to appear in children around age two and lasts until age 7. This stage is characterized by egocentrism, which is typical of children in this age range.

Their egocentric perspective makes them unable to take on the perspective of others. In other words, they have a difficult time seeing something from another angle, or putting themselves in someone else’s shoes.

Although children closer to the ages of 6 or 7 can begin to show empathy, this egocentric thought is predominant during most of this stage. The child understands the world from his own particular perspective.

However, children in this stage of development manifest and are able to utilize symbolic thought. In other words, they can speak.

Piaget’s conclusions regarding the preoperational stage

The transition from the sensorimotor stage to the preoperational stage occurs through imitation. Imitation produces an image in the child’s brain, a process that involves language.

Piaget’s third stage of cognitive development starts at age 7 and lasts until age 12. During the concrete operational stage, children begin to apply principle and logic. They can solve problems in a more rational and logical way, but only in regards to concrete objects or events.

Children in this age range aren’t yet able to handle abstract concepts. In fact, their thought is centered on the actions they carry out.

According to Piaget, children in this stage are also capable of inductive reasoning.

This stage is marked by a gradual decrease in egocentrism. This decrease is due to the child’s growing understanding of grouping. However, these children have yet to develop abstract thought and reasoning.

This fourth stage of Piaget’s theory of cognitive development is the formal operational stage, which starts at around age 12. At this point, the child is at the beginning of adolescence, which will lead him into adulthood.

The fact that the child is able to hypothesize means he no longer thinks only in terms of reality, but also in how to do things. Children in this stage of development have a better comprehension of the environment around them, as well as cause and effect.

Upon arriving at the stage, the individual’s capacity to reason is centered principally on going against fact. This is the time period in which the child begins to develop his own theory about how he views the world.

Though most children reach this stage, not all do. Unfortunately, those who don’t are often labeled as less intelligent.

These are the 4 stages of cognitive development according to Piaget. This famous psychologist believed that the entire process of developing intelligence could be related to a process of stimulation that involves 2 essential aspects. These aspects are assimilation and accommodation.

And finally, it’s important for parents to be aware of Piaget’s stages of cognitive development. That way, they can be sure that their children are developing healthily, from birth until adulthood.

This awareness will also allow parents to better understand their children’s abilities according to their age. It also helps parents provide adequate activities and avoid forming unrealistic expectations of their children.