Teething Pain: Why It Happens and How to Relieve It

When teething occurs in babies, symptoms of pain and discomfort may also appear. To relieve teething pain, there are some good habits that you can implement, in addition to very effective home remedies. 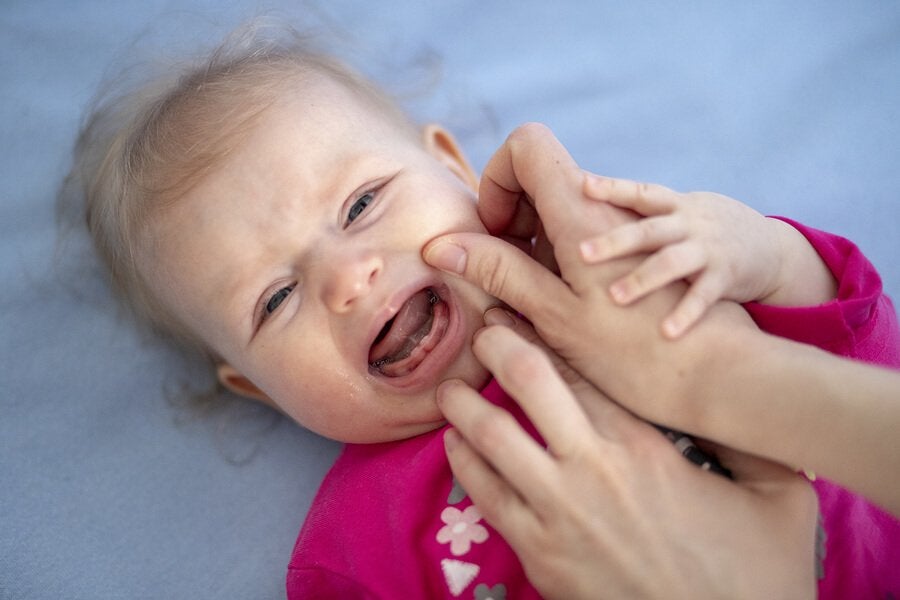 The first teeth appear between the third and sixth month of babies’ lives. For some little ones, this means discomfort, pain and feeling ill. Why does it happen, and how can we relieve teething pain in babies?

The pain and discomfort come from the inflammation of the gums. The lower middle teeth are usually the first ones to appear.

This whole process depends on genetic factors and how long the pregnancy was. But whenever it occurs, it can be extremely uncomfortable for babies.

Symptoms of teething pain in babies

The pressure of the tooth on the gums produces a feeling of discomfort that is, at times, difficult to cope with. Babies usually touch their gums with their tongues when their first teeth begin to appear.

They feel the inflammation at the same time as they feel the pain. That’s why they look for anything they can put into their mouths to try and soothe the pain.

Another sign of teething in babies is the typical “drooling.” This happens because the constant movement of the tongue in contact with the inflamed area causes more saliva to be secreted. In turn, the saliva begins to drool down their chin because they haven’t yet mastered the swallowing reflex.

Babies will likely cry and wake up more frequently at night in the teething stage. This happens because the pain in the gums adopts the same rate as the heartbeat. At night and when lying down, the throbbing pain tends to intensify.

You should take into account that the pain may start up to three weeks before the appearance of the first teeth. Occasionally, the inflammation in the gums can cause fever in some babies.

Secondary discomforts due to teething in babies

In addition to the pain caused by the inflammation, there can also be other secondary discomforts. The first is that the constant drooling means that the baby ends up soaked in a matter of seconds.

To solve this, there’s nothing better than a good old-fashioned bib, and a good wiping of the chin area to prevent redness. However, you’re likely to need other solutions if the baby’s drooling is excessive.

“The pressure of the tooth on the gums produces a feeling of discomfort that, at times, is difficult to cope with”

How to relieve teething pain

In addition to the use of paracetamol and ibuprofen (always according to your paediatrician’s instructions), there are also some useful homemade remedies and tricks. Here are the best-known ones:

Teething in babies usually takes place in a symmetrical fashion between the upper and lower gums. It begins before six months of age and finishes at two years with the back teeth.

Although pain and discomfort are quite normal during this stage, you should always be alert to other potential symptoms. A  fever of more than 100° F should be controlled by a specialist, as well as any other unusual behavior or symptoms that parents may notice.