What Your Baby Feels When You Cry From Sadness During Pregnancy 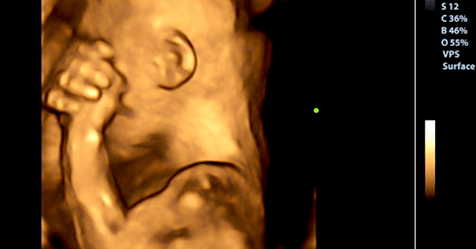 What your baby feels and experiences inside your belly is directly connected to what happens to you. At this very moment, you are his everything. You are his closest contact to the outside world as well as his inside world.

Science has demonstrated that, during pregnancy, your baby feels the same thing you feel and with the same intensity. If you cry out of sadness, your baby will feel the same emotion; he will feel as if this sadness and anguish was all his.

During the gestational period, your baby is preparing himself for life; and he does so through the messages that you, as a mother, send him, states Curt A. Sandman, one of the scientists that participated in a recent study at the University of California-Irvine. This study found that the emotional state of a mother influences the development of her baby before and after birth.

This study also found that when a baby is inside the uterus of its mother, he is an active participant in his own development. This is especially so because, during this time, he is recollecting information for life after birth.

And one of the most remarkable findings of this study, in which Elysia P. Davis and Laura M. Glynn also participated, is that babies can also feel and experience the emotional state of their mother.

The placenta receives the hormonal signals of sadness

As the baby grows, he constantly receives messages from his mother; and not only the sound of her heart or the music she plays for him close to her belly. During this stage the baby receives chemical signals through the placenta; and those also include signals regarding the mother’s emotional state.

If the mother is very sad or severely depressed, the baby also experiences it. And this emotional state affects the baby’s development for a great part of his life. In the long run, having a depressed mother could lead to neurological problems and psychiatric issues, says Sandman.

Additionally, that same team of scientists found – in a previous study – that older children whose mothers were anxious during their pregnancy (often a sign of depression) have certain differences in their brain structure. Nevertheless, more research is needed to determine what exactly it means for a child in the long-run if its mother is depressed during pregnancy.

Mood swings have an influence on babies’ emotional development

Fact: a mother’s emotional and mental state can have an influence on her baby’s development before and after birth.

For this reason, the best strategy would be to treat prenatal depression – a very treatable illness. The problem is, however, that women rarely ask for a psychological or psychiatric check-up or evaluation before the birth of their baby, scientists warn.

The best thing a mother can do during the gestational period, is to have a balanced emotional state and to feel calm because this will allow the baby to develop properly.

According to the study, what affects the baby the most are its mother’s persistent mood swings. This is because the baby feels insecure when he experiences constant short spurts of happiness that quickly turn into sadness or stress. These imbalances affect the baby’s development before and after its birth, which is why it’s essential for the mother to remain emotionally balanced.

Furthermore, a group of prenatal psychologists also assure that, besides feeling its mother’s emotions, a baby also perceives her thoughts that influence the baby in a certain way.

In that sense, a baby of a mother who didn’t want the pregnancy will feel the rejection she feels for it. This can cause emotional problems for the baby in the future.

Ideally, in this very important stage that creates such close bonds between you and your baby, make sure to feel as calm as possible. Try to avoid stress and negative feelings at all costs. In order to do so you could try meditation, relaxation exercises, and yoga. Everyone around you can help you get over anxiety and sadness.