The Umbilical Cord: What is it and what is its function? 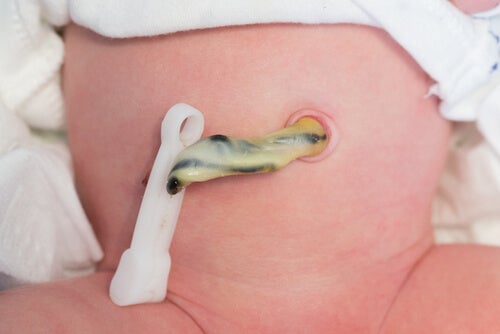 The length of the umbilical cord is about 20–22 inches. It has a spiral shape – like an old telephone cord – and, in general, contains between 10–12 spirals.

The cord contains two umbilical arteries and one umbilical vein. These are all immersed in a liquid called Wharton’s jelly.

This loose gel-like connective tissue gives the umbilical cord resistance and keeps it from getting tangled.

The two arteries and the vein are arranged in a triangle; the arteries form the base, with the vein forming the third point of the triangle.

This, along with the expulsion of the placenta from the womb, reflect the transitory nature of these organs. They both form to carry out a specific and temporary function. Once fulfilled, these organs are discarded.

During your baby’s stay in your uterus, the umbilical cord represents your baby’s only source of nourishment, blood, and high oxygen levels. It forms a connection between the mother’s placenta and the fetus’s belly button.

Given the above-mentioned functions, the umbilical cord is indispensable for embryonic development.

The umbilical cord also physically demonstrates the union between mother and child in its maximum expression. For that reason and many more, mothers are a fundamental pillar in their children’s lives.

Among the umbilical cord’s key functions for fetal development, we’d like to highlight the following:

As we can observe, the umbilical cord isn’t only a fundamental part of the creation of new life. It also provides a way to save lives.

The donation of umbilical cord blood is a painless process that can be performed immediately after birth.

There are many doubts that arise regarding caring for the umbilical cord after a baby’s birth. Let’s go over a few:

When is the right moment to cut the cord? Traditionally, medical professionals have cut the umbilical cord immediately after a baby’s birth.

However, the World Health Organization and other researchers suggest waiting between 30–120 seconds before severing the cord.

As a result, the possibility of the baby needing a blood transmission reduces, as does that of suffering an intravenous hemorrhage.

However, if you’re planning to donate umbilical cord blood, the cord will need to be cut immediately.

What does the caring of a newborn’s umbilical cord consist of? The piece of the umbilical cord that remains attached to your child’s belly button will dry up in a matter of days and fall off.

This usually occurs during the first or second day of life. Meanwhile, you should clean the area with isopropyl 70% alcohol and sterile gauze.

According to recent studies, caring for a newborn’s umbilical cord with these substances isn’t absolutely indispensable. You can also just keep the region dry.

However, in areas where the risk of bacteria is high, this cleaning process can help prevent possible infection.

Can I bathe my newborn? Yes, you can, but you must always gently dry the umbilical cord and surrounding area afterwards.

How can I be sure everything is okay? If you think the cord looks strange, or has a strange smell, is bleeding or oozing liquid, talk to you pediatrician.

A very small amount of bleeding is normal (spotting, small stains), but larger amounts should be brought to your doctor’s attention. He or she may prescribe antibiotics to avoid infection.