Your Baby's Newborn Reflexes: What You Should Know

Don't miss out on your newborn baby's reflexes – they're automatic from birth and last just a few weeks! 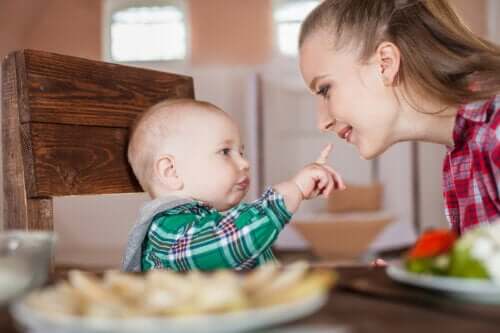 Much of your baby’s physical activity during the first weeks of life consists of automatic reflexes. For example, if you put your finger in their mouth, they’ll suck on it. When there’s a bright light, they’ll close their eyes tightly. These are automatic responses known as your baby’s newborn reflexes. Some can last for months, whereas others will disappear in a matter of weeks.

We’ll now explain more about your baby’s newborn reflexes, and you’ll understand why your baby has them and what each one of them means. In this way, it’ll be much easier for you to understand your little one.

In some cases, these reflexes become voluntary responses over time. For example, your baby is born with a “search” reflex; they’ll turn their head if you touch their cheek.

This is a reflex that helps your baby to find their mother’s nipple in order to feed. At first, they’ll just look from side to side, but, as time goes on, they’ll be able to move their head to get into a feeding position.

Sucking is another survival reflex that a baby has even before birth. You may have seen this reflex on your baby’s ultrasounds, maybe when they put their finger in their mouth. After birth, when a breast nipple or bottle teat is placed in the baby’s mouth and touches the roof of the mouth, the baby automatically starts sucking.

Coordinating these rhythmic sucking movements with breathing and swallowing is a relatively complicated task for a newborn. So, even though it’s automatic, not all babies master it right from the start.

However, with practice, the reflex becomes a skill that every baby controls well. Your baby will also begin to use these movements to find comfort. They may also feel comforted when you give them a pacifier or when they suck their own thumb.

Moro reflex, one of the newborn reflexes

Another newborn reflex during these first few weeks is called the Moro reflex. If your baby’s head changes position abruptly, or if something loud or sudden frightens them, then they’ll react by extending their arms, legs and neck. They’ll change their normal expression to one of fright and then join their arms together quickly. They may also cry out loud.

The Moro reflex, which may be present to varying degrees in different babies, peaks during the first month and then disappears after two months. So much so, that this reflex will disappear almost completely without you even noticing.

You’ll see yet another reflex when you stroke your baby’s palm – watch them immediately squeeze your finger! Or, alternatively, caress the sole of their foot and watch it flex as the fingers curl tightly.

In the first few days after birth, your baby’s grip will be so strong that it’ll seem like they can really hold quite heavy objects. Don’t try this though, as they’re not ready to do this yet. Your baby has no control over this response and may suddenly let go.

One of the most interesting automatic responses is the asymmetrical tonic neck reflex, also known as the “fencing response.” You may notice that when your baby’s head turns to one side, then their arm on that side straightens up, and the other arm bends, as if they were fencing.

However, don’t be surprised if you don’t see this response in your child. It’s a subtle one, and if your baby is upset or crying, then they may not do it. It disappears between five and seven months of age, but even if your baby does do it, it can go unnoticed.

Another special reflex in babies is the walking reflex. They can’t support their own weight, but if you hold them under your arms (holding their head, too) and let their feet touch a flat surface, then they’ll put one foot in front of the other as if they’re going to walk.

This reflex will disappear after two months. However, it’ll return again, but then it will be as a form of voluntary behavior that will set them on their way to really walking towards the end of their first year.

In short, although you may have thought that babies are completely helpless, they actually have several protective reflexes. For example, if an object comes directly towards your baby, they’ll turn their head to try to get out of the way.

Of course, babies are absolutely dependent on their parents for their development, growth, feeding and so forth, but these reflexes do help them to carry out certain survival-related reflexes, such as sucking and feeding.

From birth, babies begin to perform certain innate movements in order to adapt to the environment, survive, and protect themselves.…

A baby's behavior
Separation Anxiety in Babies: What You Should Know

The anxiety and restlessness that manifest in a baby who’s separated from their parents is what’s understood as separation anxiety.…