Babies perform a number of automatic movements, called newborn reflexes. In this article, discover their classification. 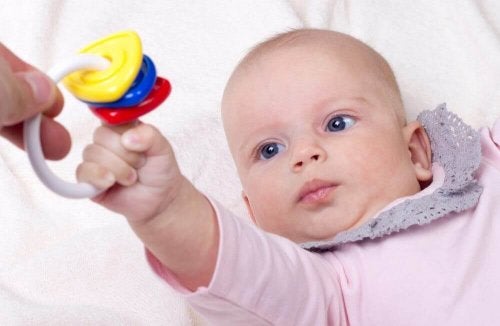 From birth, babies begin to perform certain innate movements in order to adapt to the environment, survive, and protect themselves. They’re called newborn reflexes, which can be categorized into various types. Therefore, in this article, we’ll explain the classification of newborn reflexes.

As healthy babies grow, they develop a series of psychomotor skills. Thus, at first, the movements babies perform are the consequence of reflexive acts and aren’t intentional. But, gradually, they acquire the ability to control their bodily movements.

What are newborn reflexes?

Reflexes are organized patterns of behavior that are performed as a response or reaction to external stimuli. In this regard, these movements can occur in the following ways:

Most reflexes disappear with age, typically in the first six months when voluntary body control increases. Nevertheless, others are maintained and perfected throughout life. Walking, as well as the parachute reflex, is a reflex that appears when babies are approximately five or six months of age.

In this sense, bear in mind that the permanence of a reflex in a baby after the age at which it must disappear can imply the existence of brain damage or nervous system problems.

As we mentioned above, there are different types of newborn reflexes. These reflexes are classified according to their time of appearance and disappearance. Thus, reflexes can:

Reflexes that completely disappear in the first months of life

Reflexes that appear around birth and remain throughout life

The Importance of the Neck Reflex during a Baby’s Development
A baby’s reflexes are known as involuntary automated responses to different stimuli. One of the most important is the neck reflex. Read more »
Link copied!
Interesting Articles
A baby's behavior
How Do Babies' Sleep Patterns Evolve as They Grow?

A baby's behavior
Separation Anxiety in Babies: What You Should Know

The anxiety and restlessness that manifest in a baby who’s separated from their parents is what’s understood as separation anxiety.…